James Martin & Life in the Country 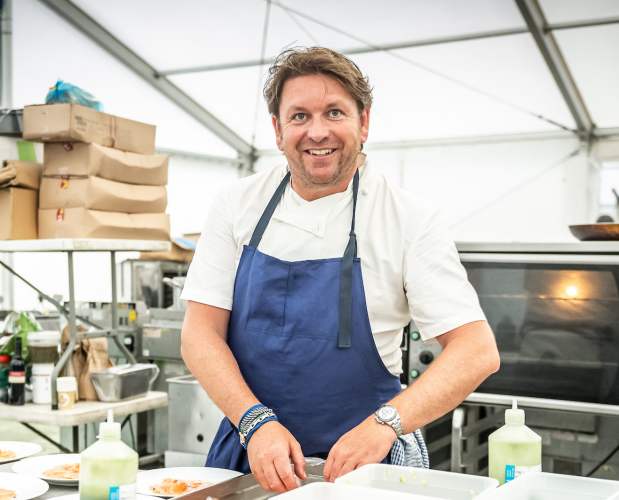 A familiar face on TV, the 48-year-old Yorkshireman regularly appears on ITV’s This Morning as well as hosting his own weekly show, James Martin’s Saturday Morning. But he has finger in lots of other pies as well! For the third consecutive year, Chef James Martin is hosting ‘The Enclosure’ restaurant at The Game Fair, which is being held Friday 23 to Sunday 25 July at Ragley Hall.

As well as designing the game-based menu, James will be mingling with diners during both breakfast and lunch service. A big advocate of cooking with game, James tells us more about his love of wild meat and other aspects of country living he enjoys.

Have you (like many people) enjoyed spending more time in the countryside over the past year or have you still been busy?

Yes, I have. I like the city but I’m a country boy at heart because I was brought up on a pig farm. Farming, food and countryside is in my blood really. I’ve always been passionate about the countryside and I’m quite fortunate to live just outside of Winchester in rural Hampshire so we’ve got outdoor space right on our doorstep which has been a lifeline during lockdown.

Tell us about your cocker spaniel Cooper

Cooper has been in training for three-and-a-half years and to be able to spend so much time with him, more than I ever have before, has been amazing. I’ve always been fascinated by our ability to train dogs. When I was a young kid, there was a gamekeeper in my village who used to look after the Castle Howard estate and he used to have an immaculately trained gundog called Jett.

I was always so impressed by a dog who would just sit there and do nothing and just wait for his owner. Now I finally understand what it takes for that bond to happen. I’ve been able to work with Cooper on several items for This Morning where we are focusing on promoting the countryside using working dogs.

Do you get many opportunities to shoot, hunt or fish in your own time?

If there’s one positive that’s come out of this nightmare for the people who work in the hospitality industry, it is being able to spend more time doing different things. We never had time before and time is something you can’t buy. Fishing wise, a friend of mine has a nice stretch on the River Test and another mate of mine has one on the River Itchen so I have been able to get out.

I’ve really got into fishing but I think that’s an age thing as well, I was never really into it as a young kid. I think the older I’ve got the more I’ve realised what a special thing it is. On one trip to Scotland I spent four days on the River Tay and caught nothing but a cold but just being there was something I’ll never forget.

Shooting wise I tend to pick it up when I can. I love all manner of outdoor pursuits. Friends of mine have got some shooting estates so I’m now appreciating what it takes to run estates like that. Over the years I’ve met these people through the restaurant industry and it just shows you how labour intensive it is to keep and maintain something like that.

Where else do you enjoy spending time outdoors in the UK?

Scotland is one of my favourite places on earth, it really is. Orkney, Shetland and the Highlands, any opportunity that I can get to go up there I go because it’s just bloody spectacular. The west coast of Scotland is also amazing. Anybody who knows me knows that I love Scotland and Scotland has always been very kind to me over the years.

I also love the New Forest, it’s beautiful. A chef mate of mine, Gareth Ward, has an amazing Michelin-starred restaurant called Ynyshirin in Mid-Wales and I love to walk up Snowdonia when I visit, it’s wonderful.

What do you particularly enjoy about the larder of the British countryside?

I think we’ve got one of the greatest larders in the world. We’re fortunate enough to be on an island surrounded by water. From Scotland’s seafood like scallops in Orkney, right the way down to Cornwall with Cornish sardines. I think there’s such a variety there.

Meat is exactly the same because of the topography of the land. You’ve got amazing beef up in Scotland, amazing lamb from Wales and then there’s fantastic garlic on the Isle of Wight. We have such a variety of weather north to south. I think that’s what makes Britain unique. As a chef you’ve got so many seasons, from the Jersey royal potatoes to Scottish raspberries – and of course game.

How often do you try to incorporate game in the dishes you cook in restaurants/at home?

When it is in season, I use it all the time. I use masses of feathered game and people know that I probably promote it more than anybody on television. Every week I’m cooking with pheasant, partridge, grouse and guinea fowl. I’m a big fan of it because I was brought up on it and I was surrounded by it.

I think there’s a real myth surrounding game and a lot of people don’t necessarily understand it. I think a lot of that is just about education and where I stand in terms of what I do for a living; hopefully I can teach the public there is something else out there.

I have been working with Wild & Game to help them develop their recipes so we constantly get given little tasters and testers. I cook it a lot; frozen spatchcocked partridge on the BBQ is delicious in the summer. If you marinade it with a bit of yoghurt and some spices and put it in a tandoor, that’s my kind of thing.

You’ve been announced as the host for The Game Fair restaurant ‘The Enclosure’ for the third consecutive year. What keeps bringing you back to the event?

It’s amazing to be going back again, particularly as the response has been so great in previous year. My day-to-day restaurant is usually a 100-seater so to walk into a marquee where you’ve got 300 covers in the middle of a field, that’s something very different indeed. I remember one of the times I attended The Game Fair I parked my motorhome in what I thought was next to the restaurant. When I woke up there were dozens of horses all around me. It was quite a surreal moment while I was still blurry eyed!

It’s an amazing event and the food is an essential part of it but it’s one of many parts that make it a very special show. The restaurant is in a great location as it’s at the epicentre of where things happen which is a cool place to be. I’ve worked with James Gower, The Game Fair’s Managing Director, for years, and he really has faith in letting me just crack on. You’ve only got to go to The Game Fair once to see why it’s so special.

What other areas of The Game Fair are you excited to see?

I really like seeing the birds of prey at the Falconry Village and the working dogs. I also like Gunmakers’ Row - walking the full length of it is the one thing you’ve got to do if you’re there haven’t you? It is pretty spectacular so I’m looking forward to that.

What can visitors expect to see on the menu this year?

We are going to do a bit of everything. Lamb has always been quite popular, so we’ll certainly be putting that on the menu. Buttermilk rabbit also worked really well last time so I might put that back on again; it’s like our own version of funky KFC.

There’s got to be something for everybody so there will certainly be a little bit of fish in there and of course we will put game on there. We’ve got a great supplier for that with Wild & Game. There’s lots of things we’re working on and we will use what we were going to do last year as a template. I used to go to The Game Fair as a punter and just have a wander round and now to see it on the other side and see all the infrastructure and planning that goes into it, is amazing. It’s great to be involved and hopefully for many years to come we can build up something really special.

To experience The Enclosure, you can purchase one of three available VIP packages starting from £99 per person (includes entry to The Game Fair).