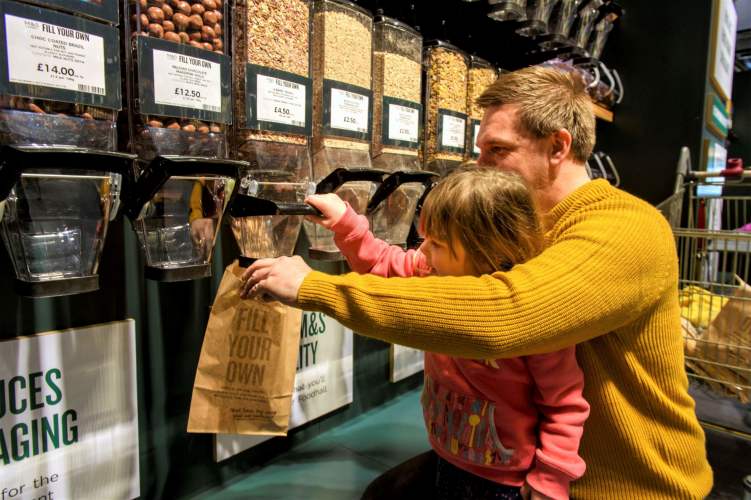 Supermarket schemes may get the fanfare, but who’s really pushing zero waste forward, and what’s in it for you? Words: Anna Blewett

Reusable bag? Yes. Clean containers to be filled? Of course. Reusable cup for the complimentary coffee? Damn. Remember those good old days when a shopping list detailed just what you’d be bringing home, not what you need to remember to take with you?

News that M&S is extending the trial of its refill scheme made quite a splash earlier this month – not surprising since our demand for good news stories about packaging far outstrip supply. It’s nearly two and a half years since Blue Planet II woke us to the impact our grocery shopping has been having on the environment these past few decades. Add in China’s 2017 decision to halt imports of our post-consumer plastic, and it’s no wonder the packaging that cradled our foods suddenly looked so much less benign.

That jolt of public consciousness caused a retail revolution like never before, with supermarkets scrambling to pledge they’d be curbing their plastic habits. Has change materialised? Hmmmm. Iceland recently announced a 29% decrease in plastic packaging on own-brand items, but In December ended the tentative trial of loose fruit and veg after sales fell 30%.

It may have acted too soon; research by M&S suggests two thirds of us are more likely to consider refill schemes now than we were a year ago, and that the biggest obstacle us shoppers encounter is finding somewhere that offers it. Step up a wave of independent zero waste shops that have popped up across the nation as retail behemoths have struggled to find the brakes on their plastic-intensive business models.

Exact numbers are hard to obtain, but a UK directory compiled by Zoe Morrison, author of the Eco Thrifty Living blog, currently lists over 130 stores offering refill facilities. Among that number is Zero Green, opened in Bristol in 2018 by co-workers and fellow conscious consumers Stacey Fordham and Lidia Rueda.

“We were one of four zero waste stores nationally when we started,” says Stacey. “I think health food shops in the past have gone down that route of having a few dispensers. They give you the privilege of shopping somewhere pretty with nice organic food….but they’ll charge you lots of money for that. We very much think the other way around, that not having packaging shouldn’t mean paying as much as or more than you do from a supermarket.”

Zero Green’s no-frills philosophy was a hit from day one. “On our first day of opening we had a lot of people arrive with with jars and tubs all ready. Others wandered in looking like they’d landed on an alien planet.” Lidia and Stacey’s hard work and retail nous has made the project a huge success. Within six months of trading the shop had outgrown its premised and later this month a second branch will open in the city. “I’d seen it from the other side,” says Stacey, who worked for Sainsbury’s for 17 years. “I could see what supermarkets were getting very wrong.”

The scoop and save shops of old may not have survived into the second decade of the 21st century, but supermarkets continue to revive their memory. Morrisons promises that its butcher, deli and fishmonger counters will fill your home-washed containers. Tesco has pledged to remove one billion pieces of plastic from its operation over 2020. Sainsbury’s is working with Ecover on a detergents trial.

Waitrose may well be leading the way the pack; nearly a year after its first Waitrose Unpacked refill section opened in an Oxford store it has four branches where customers can fill their own containers. station. Stacey is unimpressed. “The Cheltenham store has a massive space for its refill station but really limited options: one rice, six or seven pastas. It seems like a bit of a token gesture, like they’re doing what they feel they ought to rather than going at it full pelt.”

This May Asda, which is reportedly responsible for using 65,000 tonnes of plastic a year currently, will invite customers to its ‘sustainability shop’ in Middleton, Leeds. Besides the predictable own-brand staples the shop will encourage shoppers to release deluges of Kellogg’s Rice Krispies and PG Tips tea into their containers of choice.

Big brands, it seems, are the next frontier. A silo of Tate and Lyle syrup really is something worth holding out for, though whether we’ll be able to drag our eyes away from the glistening column of amber sugar long enough to avoid spillages remains to be seen.

Because here’s the catch: for the foreseeable future it’ll take significant staffing power to handhold us through the switch to self-service refill stations. We’ve all become conditioned to select our plastic-bound products off the shelf, push them around stacked shelves and then beep the barcodes before bagging up.

Embarking on a whole new choreography of steps – arriving with clean containers, neatly filling them and successfully deducting their weight from that of the product inside – is no mean feat. “It’s labour intensive,” agrees Stacey. “Every day we’re moving things from sacks to dispensers, washing dispensers, and helping people weigh things and talking to customers…”

The process has its perils. At a whole food shop near Great British Food headquarters in Colchester, ‘DO NOT DISPENSE WITHOUT A CONTAINER!!’ is the urgent felt tip message for users of a gleaming eye-level hopper of Brazil nuts. Presumably somebody learned the hard way exactly what an avalanche of tropical nuts sounds like as it hits a polished concrete floor.

Some of the most innovative shops have a ‘pergal’ machine, a chiller designed to house a low-packaging box that can dispense, among other liquids, milk. If a milkman graces your neighbourhood you may think you have sustainable milk sorted, but as Nick Webb of Cornwall’s Trewithen Dairy points out, things are more complicated than our 2017 selves realised.

“The knee-jerk reaction at that time was ‘glass bottles are good because they’re what we used to have, they can be reused and plastic just ends up in the oceans’,” says Nick. “But the argument has matured to the point where we ask ‘Is replacing plastic actually a good thing if it means creating a bigger carbon footprint?’

For example, lots of people down here in Cornwall took up glass bottles, but what they didn’t realised was that the only sizeable plant for producing bottled milk was just outside Heathrow airport. So lorries were coming down the M4 and past our cows on the M5 and A30 with milk that wasn’t even Cornish.”

The dutifully washed bottles “would be collected up and taken back up the motorway to be reused again with milk from the Midlands or wherever.” The joy of the pergal is that the thin plastic bag within can hold local milk for glass-toting shoppers without clocking up the kind of emissions that road haulage creates.

The joy of zero waste is the power it gives back to the shopper. Want to taste a locally-made tempeh without forking out for a whole block? Buy a slice. Buy half! Unpackaged spices are a particular boon for the discerning cook. Buy just what you need (seriously, the assistant ringing up your two star anise will be unshockable) and it’s like having one large, regularly-replenished spice rack for your community.

Nuts, the fattier types of which are prone to going rancid if left to languish in cupboards, are a smart buy in quantities tailored to your household’s consumption. So too are speciality flours, large expensive bags of which can turn to useless blocks at the back of a damp cupboard.

For now shopping zero waste often means encountering a wholesome range of organic, plant-centric foods. But don’t worry: with big retailers dipping their toes in the shimmering waters of zero packaging, the Nutella pump and cookie dough silo are surely on their way.