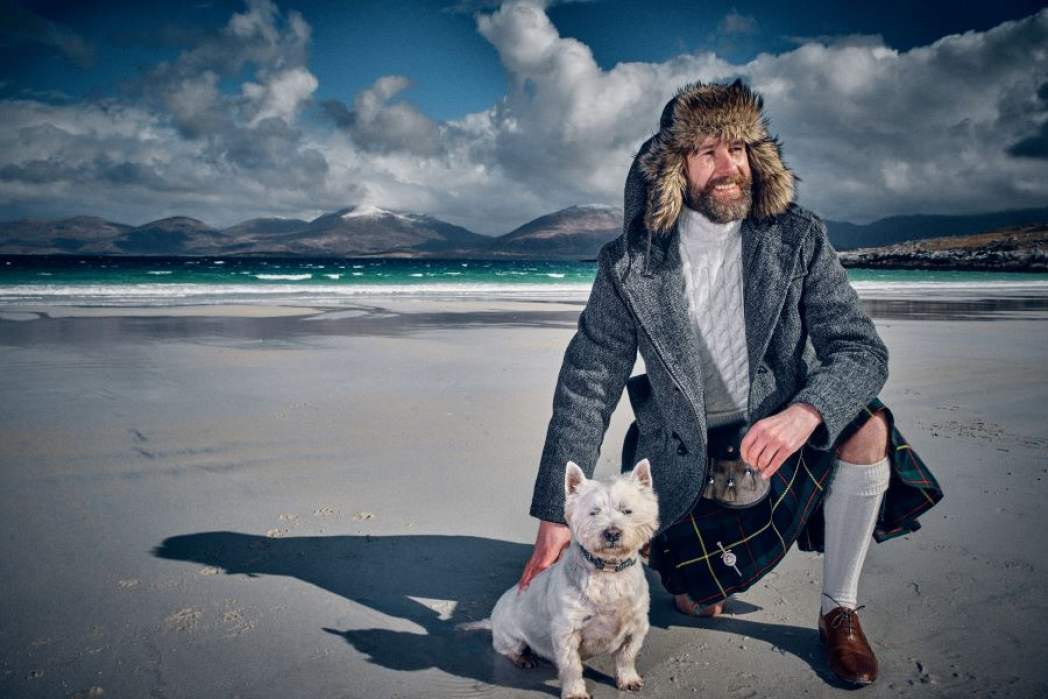 A Remote Island, an Extraordinary Baker, and Tik Tok Stardom

When Coinneach MacLeod began posting traditional Hebridean recipes on Tik Tok for his friends, he had no idea that they’d be watched by millions and catapult him to stardom

Coinneach Macleod, aka The Hebridean Baker, was just using Tik Tok’s video editing software to make an instruction video for a ginger loaf for his friends. He was taken aback when it got thousands of views. Fast forward 12 months, and he’s now had 14 million views! He uses this exposure to tell the world about the culture and traditions of his beautiful island home, the Outer Hebrides. We caught up with Scotland’s newest culinary star, and heard all about his accidental fame and his cooking inspiration – his 93-year-old Aunt Bellag.

Tell us about your island home in the Hebrides!
I live on Lewis, a beautiful island with beautiful beaches you walk along in stormy weather – a really special place! If you haven’t been, I’d really encourage you to venture north. It’s a beautiful, rugged island. The great thing about the Outer Hebrides is that each one has its own character, landscape and style; Lewis is the furthest north, which means it’s been more heavily influenced by its time as part of the Nordic kingdom. Even the Gaelic we speak is slightly different to the southern islands, because there’s so much Old Norse in it, and a lot of the Nordic heritage is still there.

I’ve lived in Glasgow, Russia and Australia, but Scotland’s really special to me. My partner Peter is from further south, in Oban, so we’re able to jump between the two.

How does the remote environment inform the islanders’ food culture?
We have a traditional way of eating; the land and the seas around us has influenced that a lot. My father was a fisherman in the North Atlantic, and a crofter, while my mum was a Harris tweed weaver. A lot of nearby families had the same upbringing.

The closest shop was 30 miles away, and it was a big adventure to go there. Food was what my father caught on the boat. Lamb and mutton were very important to us; we had a cow. The soil isn’t that good in the Hebrides, but we grew simple crops like potatoes and carrots. But you don’t know what you don’t know – for us that was completely normal.

Myself and Peter love foraging. This weekend is a big weekend for us – it’s all about making bramble jelly. We’ve done a lot this year with gorse. We made homemade pina colada with it, which has been fermenting in rum for the past four months. Wild leek and garlic grow really well here; I like making wild garlic scones.

Of course, these days supermarkets do play a large part in sourcing ingredients. I do try and get my wholemeal flour from the most northerly mill in Scotland, up in Gollspie, which is really delicious. One of my favourite things about this whole journey has been all the Scottish producers I’ve been working with, such as Isle of Harris Gin.

Why don’t you take us back to the very beginning, and tell us about your first forays with Tik Tok?

Tik Tok is a social media platform, and it enables you to shoot and edit one-minute videos in the app. That’s what encouraged me to take a look at it. A lot of people think it’s all about lip synching and dancing, but once you get past that, the skills of the people on this platform are unbelievable.

The first video I made was for a ginger loaf, which is my partner Peter’s favourite. The reason I put it up is because some of our friends wanted the recipe, and I thought it would just be easier to make a video of it and send it to them. Unintentionally, the video was supposed to be for a few friends, but then thousands of people watched it later.
It’s been twelve months now, and 14 million people have watched the videos, which is insane considering I’m from a village of 30 people.


Why do you think your videos have so much appeal?
It has always been a passion or dream of mine to promote the Hebrides. I wanted to teach people about the islands and our culture, and I thought baking was a softer way to do it. I would love to say there was a big strategy and a marketing agency behind me from day one, but it’s all very handmade and homespun. Peter works for the BBC’s Gaelic channel, and so everyone assumes he makes the videos, but when he gets home from work, he doesn’t want to see or think about cameras.

I think that’s why people enjoy it. It’s intentionally positive. I hadn’t realised until I started Tik Tok that I had an accent; but my voice is something people seem to like hearing, especially with the traditional Scottish music behind it.

At one point, our old pal Donald Trump was going to ban Tik Tok. And then Elle magazine wrote this article about how they’d miss my videos, and called me a warm piece of shortbread. My numbers started to go up and up and up. 80% of my followers are in North America, which is really interesting. I’ve really enjoyed making the content – the baking and the songs, and the Gaelic lessons.

I’ve been talking to people all over the world. Today I had an interview with a person who creates ASMR content, and later this afternoon I have a meeting with a Serbian TV company who want to film a tour of Scotland and have me be a part of it. Every day is something new.


Tell us a little bit about your new book – how did it come about?
It’s an amazing publishing company called Black & White, based in Scotland. They reached out to me, because they enjoyed my content, and could see it was about more than the bakes. Recipe books traditionally contain 100 recipes, but they wanted mine to be 75, with extra stories and photographs. It really feels special; looking at it, I’m quite humbled by the whole experience.

I’ll be honest, it took us three days to take the cover photo. It was really windy – I was like Marilyn Monroe, the kilt flying everywhere.


What two recipes in the book do you love the most?
My baking has been inspired my Aunt Bellag. She’s 93 but she’s still baking every day – you’d think she’s 50. There’s a recipe of hers in the book, called ‘duff’, which is the Hebridean version of the clootie dumpling. There’s always been something slightly different about my aunt’s duff compared to others; she said there was one wee secret ingredient that she put in. I finally found out what it was – a tablespoon of marmalade into the batter.

It’s a really delicious, traditional bake, and there are two ways to eat it. The first is as a dessert, the first day you make it, with custard. But even better the second day, you fry it up with your bacon and sausages for breakfast. It’s amazing!

I’ve really enjoyed taking traditional recipes and giving them a Scottish or Hebridean twist. I used Jura whiskey to create hot toddy choux buns – in my crème pâtissière are the flavours of honey and whiskey, and they taste amazing.


What words of wisdom do you have for home bakers?
Baking is all about using ingredients and flavours you love. Me, I love oats and marmalade and brambles and whiskey, so I use these. Keep it simple; use small dishes and small recipes. Also, when something goes wrong, but you still want to take a photo of it, turn it round a wee bit. I’m sure it’ll have a good side. Icing sugar definitely hides a lot of ills!