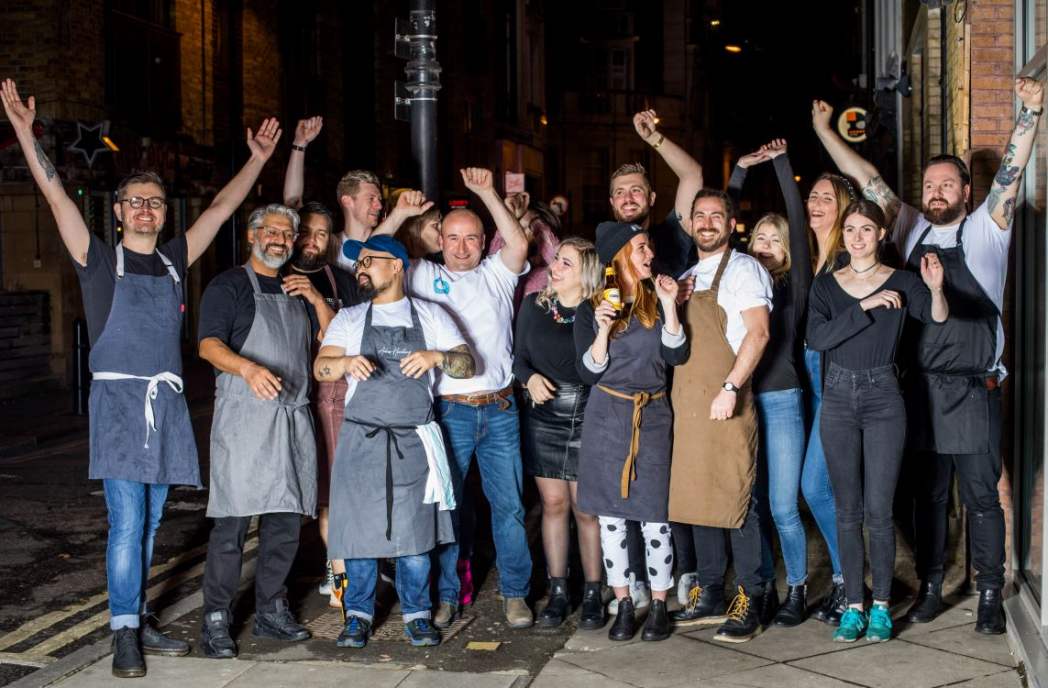 The Carcass Cartel’s ‘Chin-to-fin’ cooking: the new ‘nose-to-tail’ of the fish world

Everything you wanted to know about ‘Chin-to-fin’ cooking: the new ‘nose-to-tail’ of the fish world

Chances are, you’ve heard of nose-to-tail cooking. But how about ‘chin-to-fin’, the new term coined by the Carcass Cartel to describe their low-waste approach to cooking fish?

We spoke to Dan Shearman, founder of Carcass Cartel, to find out more about chin-to-fin and why it’s important.

Why did you decide to set up the Carcass Cartel?

I had a food truck for 5-6 years, and trundled around London selling nose-to-tail street food. That ended a couple of years ago and I formed the Carcass Cartel with a group of chefs, so that we could have a louder voice.

There are some Michelin stars in there, and some really exciting modern chefs, all interested in sustainable food.

We’ve put on a couple of events so far, focussing on ‘whole animal eating’. The aim of the Cartel is to shed a light on a more modern way of eating more of the animal. There’s a perception that nose-to-tail eating is greying pieces of offal cooked without imagination, but we wanted to show there’s a more exciting way of doing it. All around the world, there are some really fantastic recipes for using the whole animal, and we wanted to showcase that.

Examples of previous dishes include an Asian pig skin noodle dish from Whole Beast, while from Ivan from Native produced a popcorn Korean lamb’s brain, fried and tossed in gochujang. Everything we make is with a focus on parts of the animal that might otherwise be thrown away.

What would you say to people who tell you, “surely it’s better to eat no meat or fish”?

People are always going to eat meat, no two ways about it. There’s a huge movement now towards plant-based and vegetarian diets, and we’re not against that whatsoever. But if people are going to eat meat, we believe they should eat the whole animal; there’s no better way of doing it than that.

We’re trying to show people that all the different cuts of meat – even hearts – are equally as delicious as anything you would pick up in the supermarket. If you eat all of the animal then less animals need to be raised for meat consumption.

With seafood in particular, there is a lot of wastage, and this hasn’t been tackled until recently. Current culinary practices across hospitality yields over 50% waste — so that stat in itself means more than half of our fish end up in the bin. If you add in consumer buying habits often focusing on the fillet alone, you can only imagine the level of waste from the way we approach seafood as a nation.

So tell us about chin-to-fin cooking: why did you decide to tackle it now?

Very recently, there’s been a documentary that was a real misrepresentation of sustainable fishing, and what we should be doing to protect our oceans.

People were saying that there was no such thing as sustainable fishing, but there really is. And eating no fish at all isn’t necessarily the best way to protect our oceans. However, there is definitely a more sustainable way of eating fish.

For our first chin-to-fin event, we’re working with one of the most sustainable fisheries down in Cornwall, Ocean Fish. We’ll use everything that’s landed, whole, in its entirety, and putting together recipes wouldn’t expect. It’s not all about just the fillets, it’s about using everything that would normally be thrown away; the offal, the skin.

With chin-to-fin cooking, we want to showcase not only how we can all buy sustainable seafood, but also ways to cook with parts of the animal you wouldn’t have thought possible.

Have you got any advice for home cooks who want to try out chin-to-fin?

With nose-to-tail, it’s not necessarily about finding a whole animal to cook with; it’s about using unusual cuts to stimulate demand for them. However, with chin-to-fin, you are able to go into your fishmongers and ask for a whole fish.

Most of the time, it’ll come ready prepared, gutted and with the innards removed. But if you ask in advance, you should be able to get hold of one. The Whole Fish is a book by Josh Niland, which will provide you with great tips and recipes. It does use lots of Australian fish, but it’s a good point of reference.

You can use your fish heads to make stocks and soups, with larger fish you can cure and smoke the heart, then grate it over food. Pretty much every part of the fish can be edible; it’s just about not being afraid to use them.

Have you got any restaurant recommendations for people who want to eat chin-to-fin before cooking it themselves?

As far as I know, there aren’t many restaurants devoted to that. Adam Handling has just opened a place called The Ugly Butterfly, which will focus on local produce and seafood, and they’re all about low to zero waste.

What people will experience at our chin-to-fin event they won’t be able to experience in a restaurant.

Tell us about your first chin-to-fin event. 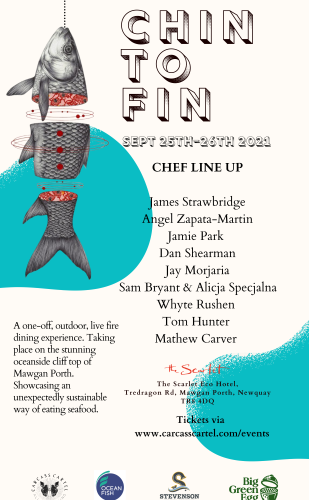 The location is incredible! It’s at The Scarlet Hotel, an eco-hotel perched on the cliffs at Mawgan Porth in Cornwall. They’ve got a meadow we’re taking over; we’re going to be cooking on Big Green Eggs. Everything is going to be landed fresh, and used whole. It’ll be long table dining with amazing sunset views.

The event is happening on Saturday 25th and Sunday 26th September, and includes a four-course chin-to-fin meal priced conservatively at £55 per person for all 4 courses.

We don’t hold back at our pop-ups, and they aren’t for the faint of heart – but with dishes produced from some seriously talented British chefs, you can be sure dishes will be another level. And if we can inspire just a few guests to look at fish differently, then we have done our job.