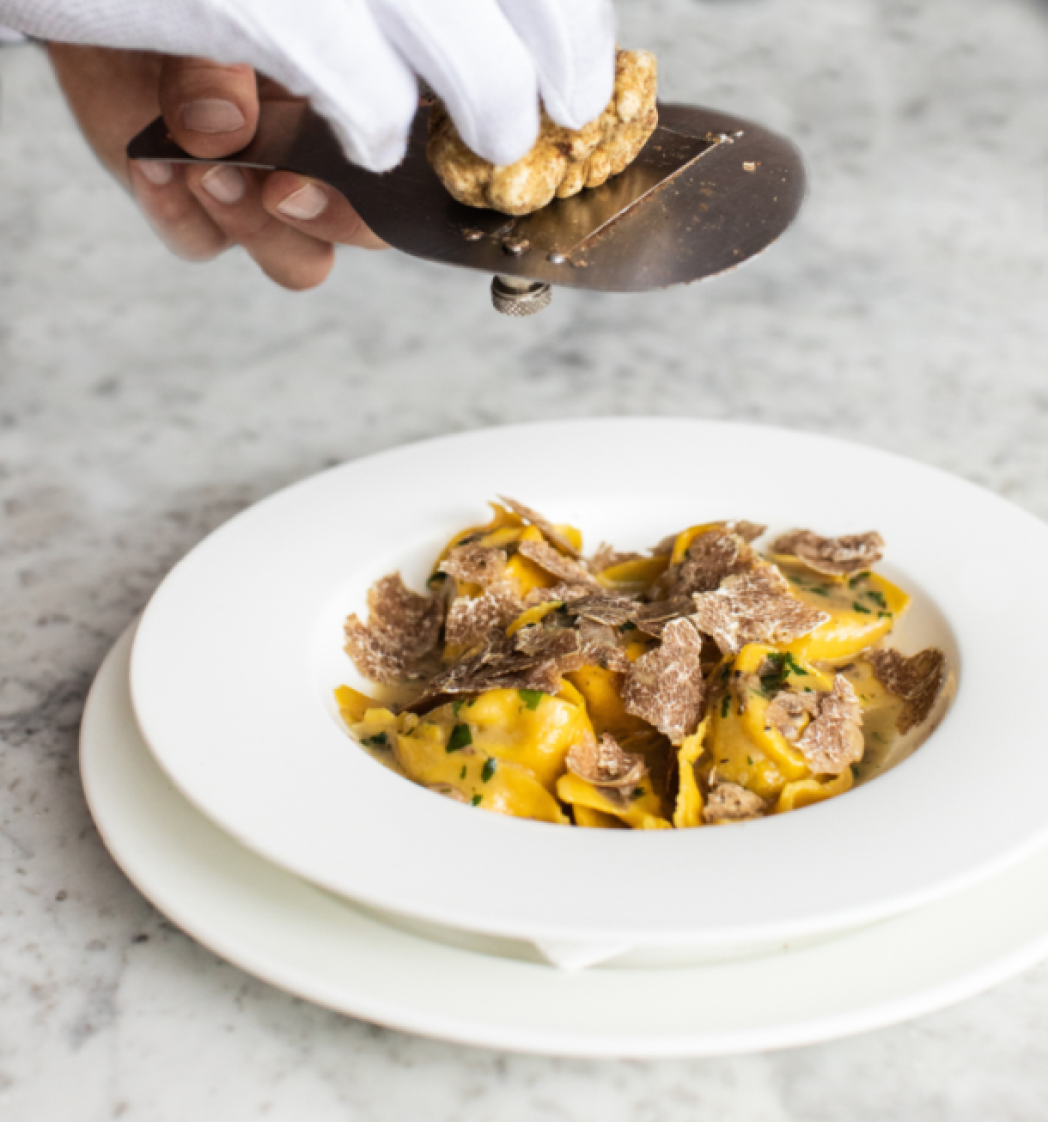 There is something magical about truffles: I always feel that the harder ingredients are to find or eat, the better they taste.

Truffles are no exception as they are a fruit of a fungus that grows from the roots of trees; this makes them very hard to find because you cannot see them and the only clue to where they are is the smell. That is why dogs and sometimes pigs (unfortunately pigs tend to scoff them before the truffle hunter can get to them) are used to find them. The dogs are very well trained and get given a treat for finding them. The season tends to be October - December for white truffles and from November - February for the winter black truffle. Both are very delicious and have similar qualities but different flavour profiles.

The white truffle is all about aroma so should be thinly sliced at the table on to a simple plate of fresh pasta like tagliarini tossed in butter.

The truffle flavour and aroma will penetrate the simple pasta, giving a lovely taste. The trick is to serve the white truffle with something that will complement but not overpower it. The best way to keep truffles is to keep them wrapped in a tissues in a dry sealed container. I find putting them in rice tends to dry them out as the rice absorbs not just the aroma but also the moisture. A good sharp truffle slicer is needed and are becoming easier to find in the UK. If you are on holiday in Italy, look out for one of these in a local hardware or kitchen shop. They are quite common and come in all shapes and tend to be made of stainless steel or wood. The important thing is the blade and if you can buy a few spare blades that is very useful as they tend to eventually go blunt, and a blunt truffle slicer is not good!

The black winter truffle is beautiful when you slice into its core, it has a kind of marbling you find in well reared beef.

The flavour is robust and can be cooked; it goes really well with meat dishes such as beef and poached chicken. Again don’t overpower it with too strong ingredients. It’s also really good with pasta and risotto dishes. One dish we always cook at Theo Randall at the InterContinental is a romanesco risotto with butter Parmesan romanesco broccoli and a fine grating of black truffle. The aroma is not as strong as its white sibling but the flavour is immense and will stay on your palette for some time.

Although they are most associated with Italy, truffles can also be found in England, especially Wiltshire.

The most commonly found British truffle is the summer truffle, which eaten too early in the season tends to lack flavour and have a nutty taste. The Collins family, who were very well connected to the titled families of 19th century England, were expert truffle hunters and could pick up to 11kg per day with their Spanish poodles. They were at the centre of the trade and were permitted to scour country estates for hidden gems as long as they let the households get the first pick of the find. Truffle hunting was very common 100 years ago but once a levy was put on owning a dog, this became less popular and no longer a profession - more of a hobby. This was not the case in France and Italy, where you will find many professional truffle hunters making a decent living over the winter months.

We tend to use Italian truffles in the season and do use British summer truffles in late summer. I am sure one day I will get a truffle supplier turning up with some perfect British winter truffles that I hope will be half the price of the Italian ones, let’s see…