Everything you wanted to know about making marmalade 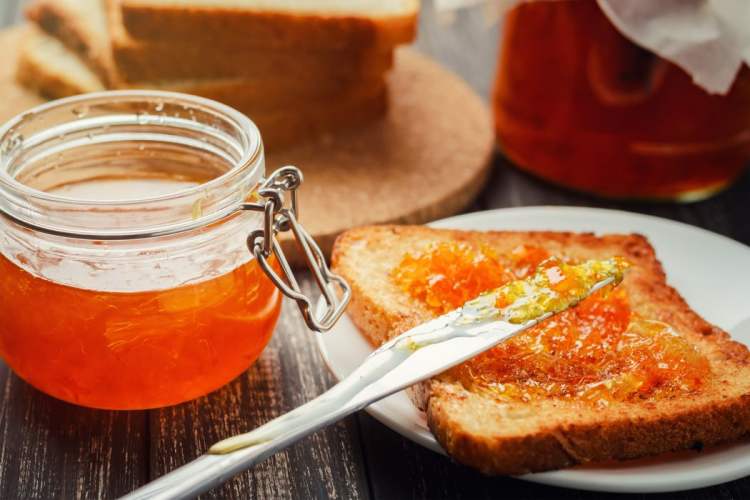 Each March the World Marmalade Awards & Festival in Cumbria celebrate everybody’s favourite breakfast preserve. Gareth May speaks with past winners, judges and spread supremoes to find out how to make the ultimate marmalade

There are few delights that whet the mouth quite like marmalade. Brekkie isn’t the same without it: a fresh pot of steaming tea, rounds of toast swiped with golden butter, and a heavenly heaving of orangey unctuous spread. By gum, that’s a wake up call. Few though can do the amber jam justice. Thankfully, we’ve collected a hit team of marmalade maestros to share their spread-making expertise (we asked Paddington Bear but he was busy).

The first conundrum: what oranges should you use?

Jane Hasell-McCosh, founder of the World’s Original Marmalade Awards & creator of the Dalemain Marmalade Range, says the thick skinned, bitter, and dry Sevilles are considered to be the king of oranges. Former winner of the Homemade Marmalade Awards Jo Aldhouse agrees. “Sevilles are the classic orange, making a fragrant, complex tasting marmalade which is not too sweet,” she says. “If I was only going to make one batch for the year, I’d definitely choose Sevilles.”

Artisan baker and marmalade judge Dan Lepard says there’s a method to the Seville madness. “Seville oranges are a brilliant all-rounder and contain lots of pectin which ensures your marmalade sets,” he says, adding the caveat that all oranges—from big navels through to blood oranges—make brilliant marmalade, depending on your recipe and how you prepare them.

One word of warning however: if you’re making non-Seville marmalade, think about using a sugar with pectin added to it, like Tate & Lyle’s jam sugar, as this will help the jam set. And whatever orange you use, make sure it’s the best fruit that you can find.

Next up, how to prepare the oranges.

Judge and River Cottage jam expert Pam ‘The Jam’ Corbin says traditionally the peel is sliced into thin, medium or thick cuts as this gives the marmalade its characteristic appearance but “the finer the cut the more pectin is released, from the pith and membranes, resulting in a better gel to suspend the peel.”

And what about all those food processor hints on the internet? Is that breaking the unwritten marmalade code of conduct? “For ease and speed the peel can be pulsed in a food processor,” Corbin says. “The flavour will be full but the final appearance of the marmalade will be a bit of a dog’s dinner. But if this method suits your lifestyle and taste, then use it. I call this: Busy Persons Marmalade.”

Once sliced, Aldhouse recommends leaving the peel—and the juice and pips—to soak overnight, as this releases yet more pectin. Then it’s on to the first batch of cooking. Preserving tradition This part of the process is known as the softening cook, and will take between 1-2 hours. Following your individual recipe is key here, Lepard says—be sure to cook the peel in the amount of water recommended.

He also prefers to juice the oranges, adding that to the pot when he adds the sugar later on, whilst saving the pips and tying them inside a square of fine muslin and letting them boil with the peel as it softens. The peel is ready when you can “easily squish it apart with your thumb and forefinger to the point where you worry that you’ve overcooked it,” Lepard adds. Also, Aldhouse adds, “This stage is important as the peel firms up when the sugar is added, so if it is not cooked enough it ends up too chewy.”

On that note, and before we move to the final cook, let’s say a word about sugar.

Experts will argue for days about the properties of cane or beet, Fairtrade or UK sourced, jaggary or coconut. Keep it simple: use white granulated sugar for a crystal clear marmalade; dark muscovada for a treacly taste; and jam sugar, which has added pectin, if you’re not using Sevilles.

The final cook, with your chosen sugar, should take somewhere between 10-20 minutes. Lepard says in an ideal world it “should be as short as possible to keep the colour bright and the aroma fruity” however, this is dependent on having the right amount of liquid left after cooking the peel and getting the proportion of sugar right, so a reliable recipe is essential. “If you vastly overdo the water, you’ll be boiling the sugary marmalade for hours and may even lose the set,” he says.

How to tell if your marmalade is set

Talking of which… what exactly does setting mean? Corbin explains: “The setting point is when the tempo of the marmalade has changed from a fast frothy boil to a slower more relaxed tempo. You can almost hear it,” she says. “A drop on a cold surface will very lightly gel but be careful not to overcook. Remember marmalade is meant to set in the jar and not in the jam pan.”

Double Gold winner Sarah Churchill of Artisan Kitchen says that the tried and tested flake method is a good way to check for a set. “After five minutes of cooking dip a spoon into the marmalade and turn the spoon horizontally. If the marmalade hangs off the spoon in a flake, it is ready. If not, continue to cook and retest.”

Overall, the cooks agree that setting is a bit of a mystery; an art developed over time, once you have a feel for the practice and that marmalade makers’ flare in the eyes. “The ideal set is a tender jelly with a bit of wobble,” Aldhouse says.

Corbin says that you should pot marmalade into sterilised jam jars and seal with a twist on lid and then store in a cool, dark, and dry place. “Well made and well potted unopened marmalade will keep for years. I’ve eaten marmalade that is twenty years old!” Lepard certainly can’t wait that long. “The best place to store marmalade is in my stomach, delivered on hot toast,” he says. Amen to that.