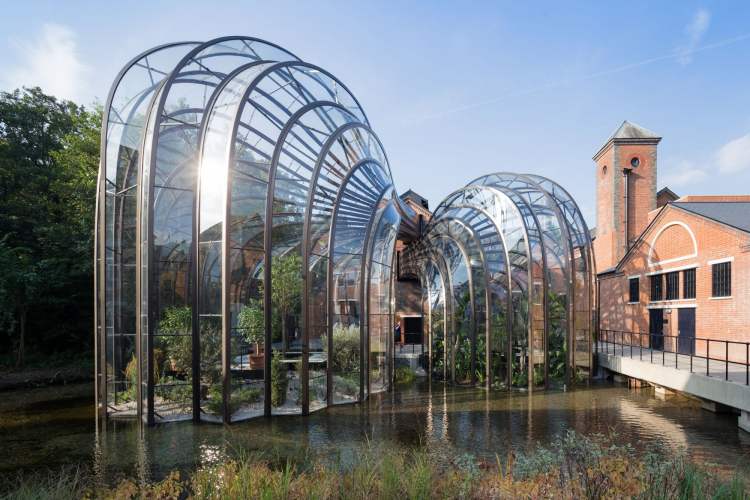 British gin is booming - it’s such a vibrant scene that combines imaginative infusions, old fashioned distilleries and cutting edge cocktails. And it turns out that many of these fantastic creations are made in extremely cool buildings! Here’s a pick of our faves:

There has been a Mill on site in Laverstoke since at least 903 AD. In renovating the mill, Bombay Sapphire has taken the utmost care to preserve the natural ecology and heritage of the site. The state of the art distillery has won awards for its sustainable design and construction. And it’s stunning!

London’s trend-setting gin makers at Sipsmith call their still ‘Prudence’! She is the first copper still to launch in London for nearly 200 years. Designed with Germany’s oldest distillery producers, Prudence’s design combines a pot, with a carter head and a column ‘still’, which makes her incredibly versatile, allowing the company to distill both Barley Vodka and London Dry Gin from the same still - albeit with a cleaning day in between. The swan motif on the Sipsmith mark is a reference to the ‘swan’s neck’ pipe, where the spirit vapour turns above the still, and is a representation of the beautiful and elegant Prudence.

The Taylor family started making gin in 1802, on London’s central Cale Street - in what the called the Chelsea Distillery. When the business grew they moved to larger premises in 1908, in Lambeth. Eventually in 1958 the company moved to its present day home in south London. The impressive Edwardian building has a 1950s extension, and features original Victorian pot stills and a botanical room, where the fresh ingredients are stored. A custom-built visitor centre allows connoisseurs to see the original stills, view the distilling process and learn about the history of gin in London.

Potato farmer William Chase is the man behind some of the nation’s favourite bags of crisps - Tyrrells. As the business grew he discovered a small American farm making vodka from potatoes and it was a ‘eureka’ moment - ‘Chase Vodka’ and subsequently ‘William’s Gin’ were born. The distillery is set at the heart of the potato farm and means that the bottles are all truly ‘single estate’.

Dating back to the early 1400s, the Plymouth Gin Distillery is the oldest working distillery in England. It has been making Plymouth Gin according to the original recipe since 1793. The Refectory Room - a medieval hall with a fine hull-shaped timber roof was built in 1431. The buildings were formerly a monastery, inhabited by the Black Friars. In 1793 a Mr Coates joined the distilling business of Fox & Williamson and the distilling of Plymouth Gin began. Soon the business was to become known as Coates & Co, which it remained until March 2004.

You can buy all of these gins at the Waitrose Cellar