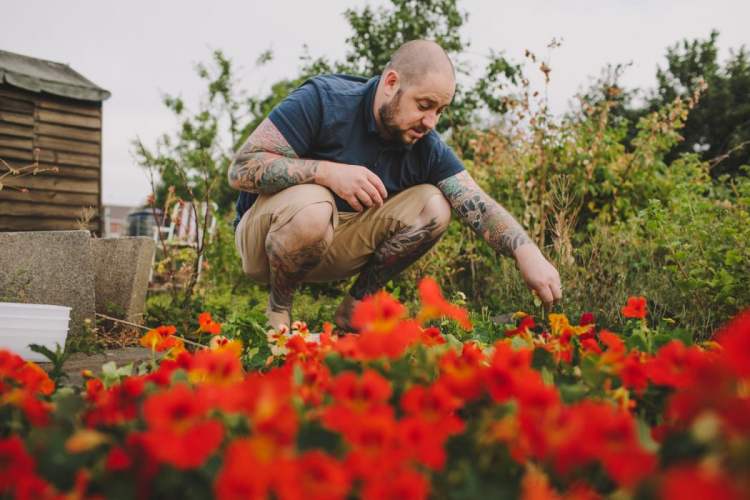 Summer’s gluts are well behind us, but its sun-sweetened flavours live on in the kitchens of a new generation of chefs, putting plant-based ingredients at the heart of the plate. Anna Blewett meets the rule-breaking cooks abandoning old stereotypes to create plant-powered dishes that play with our perceptions

It’s 2003 and I have a horrible task to perform. Dressed in my waitressing uniform of double denim and a branded cotton apron, I’ve just seated a polite and chatty table of six who listen to every word of my spiel about the specials menu, before asking the unaskable: “What’s the vegetarian dish?”

Truth is, there is no vegetarian dish. The prevailing view in this establishment is that if your diet revolves around plants you’re not serious about food and, frankly, will be happy with anything. So it’s my job to tell the sweat-browed chef, already wild-eyed with the challenges of pulling together the plates we do have, that it’s time to rummage in the dry store for a handful of risotto rice and hope for a morsel of dried porcini mix.

Fast forward the best part of two decades and British cuisine is decidedly less binary. Chefs are less likely to assume ‘proper’ food means meat; diners are willing to accept that a meat-free meal can surprise, excite and – most importantly – satisfy. Alchemilla, a subterranean restaurant on an unassuming street in central Nottingham, has been part of the change.

It’s here that chef Alex Bond has forged an exciting third way for fine dining. “It was never intended to be a hook,” he says of his plant-centric approach. “It’s just something that happened. At home I used to eat loads of supermarket meat and I had what alcoholics might call a moment of clarity. I just stopped eating meat and ate more adventurous veg at home, making flavours that I’d eat in a restaurant. So I took that into the kitchen; it was a natural evolution.”

After a long career that’s taken in the Michelin-starred Restaurant Sat Bains, Auberge du Lac and Turners in Birmingham, Alex has created Alchemilla from scratch, literally carving it from the soft sandstone that backs the abandoned coaching inn where he’s set up shop. Alchemilla has gained a name for thrilling dishes that – yes – may include meat or fish but are built around the magical flavours coaxed from plants. “I started cooking this way about six years ago,” says Alex, citing his preservation section as the heart of the operation.

The stores at Alchemilla are particularly pleasing, a veritable Brambly Hedge network burrowed into the sandstone behind the kitchen and off a tunnel that drops away in to darkness. Under the fluorescent light Alex riffles through his stash of goodies, dodging bulging muslin bags dripping vivid green juice into steel bowls, and pulling out produce- packed pouches stacked alongside a polystyrene box. “That’s our koji culture,” he explains.

“Lately we’re playing around with it, trying it roasted. Then that’s 90 punnets of pickled green strawberries. This is our tasty paste – fermented wild garlic, caramelised onions, seaweed. That’s the cultured butter for our bread.” The latter, solid cream tiles of cling-wrapped dairy, are the perfect example of Alex’s approach.

Double cream is cultured for five days (less in summer) with a buttermilk backslop before being chilled and finally whipped for service. “You can’t buy butter like that. Ours is almost cheesy, I guess, but with our bread it’s just perfect.” The evolution of the bread, a dark rye sourdough baked in house with fermented barley grains, is a whole other story; Alex could talk about his bread and butter ALL DAY.

This razor sharp focus on kitchen craft, and in particular a circular approach to sourcing, throws up some surprises. Spent coffee grounds are transformed very successfully into snappy tuiles that sandwich duck offal. Opened wine is used to make vinegar or vermouth. Trimmed leek tops are blitzed with oil and finely strained. The attention to detail is bewildering given how many dishes this small team serve. Across ten courses – plus a few amuse bouches for good measure – I taste some genuinely startling things. Roasted broccoli with an umami-rich miso ketchup and nam pla-glazed peanuts all dusted in nori powder.

A wedge of barbecued celeriac oozing goat’s butter and served with a caramelly black garlic purée. A cauliflower steak roasted in a yeast butter that’s crazily reminiscent of roast chicken, with such a body to the sauce that I check with the waiter who confirms yes, this really is just yeast and butter. Salad is dressed with charcoal-infused oil that gives the plump and cool leaves all the charred flavour of a well-cooked steak.

“If anything there’s more variety,” says Alex of the plant-based larder. “Duck, beef, lamb…it’s all ultimately the same thing. If I got rid of your nose and gave you four pieces of medium rare meat you’d probably struggle to tell them apart. More people should be putting vegetables at the centre of things.”

Of course, Alchemilla isn’t the only restaurant blurring the lines to put vegetables centre stage in British cuisine. A movement arguably fuelled by the wizardry at Simon Rogan’s L’Enclume has been pushed forward by Chantelle Nicholson at Tredwells (whose Vegwells tasting menu debuted as a supperclub last summer) and Alexis Gauthier of the eponymous Soho restaurant ( a “green-fingered vegetable magician” according to critic Giles Coren).

Tommy Banks, another Yorkshireman and the executive chef at the Michelin-Starred Black Swan at Oldstead, has turned has turned heads with (amongst other things) his crapaudine beetroot slow- cooked in beef dripping. The trick of blurring the lines between meat and veg captures the zeitgeist, ekeing out precious beef to transform an earthy root into surprising hybrid of plant and protein.

“My ethos evolved because we grow everything on the farm,” says Tommy. “We plan nearly a year in advance what we’re going to sow and what we’ll have on the menu. Vegetables are definitely centre stage but that’s not to say we don’t still cook with lots of meat and fish. It’s just that veg are as considered in the creation of the dish as much as the protein is.”

Winter is an interesting and, you might expect, stressful time for plant- centric chefs. The abundant harvests of late summer are over, and months of starchy roots stretch ahead. Thanks to the well-stocked pantries at Alchemilla, The Black Swan and beyond, summer flavours will linger on, albeit transformed into something more complex, sour and surprising.

“The thing we try to do is preserve things for winter. I have a team of chefs working all summer long preserving – pickling, drying, freezing, fermenting – so we have a portfolio of ingredients we can use in the winter. I really love the sour and umami, the delicious flavours you get. In winter our menus are more protein led than in summer because we might not have access to so many vegetables, but we have these cool ingredients that can offset a nice bit of protein. They give a more interesting menu in the winter maybe.”

Have expletive-filled rants from chefs passed into culinary history? Perhaps not, but these days it’s more likely to be a batch of over-charred hispi cabbage, rather than a herbivore customer, that lights the touch paper.