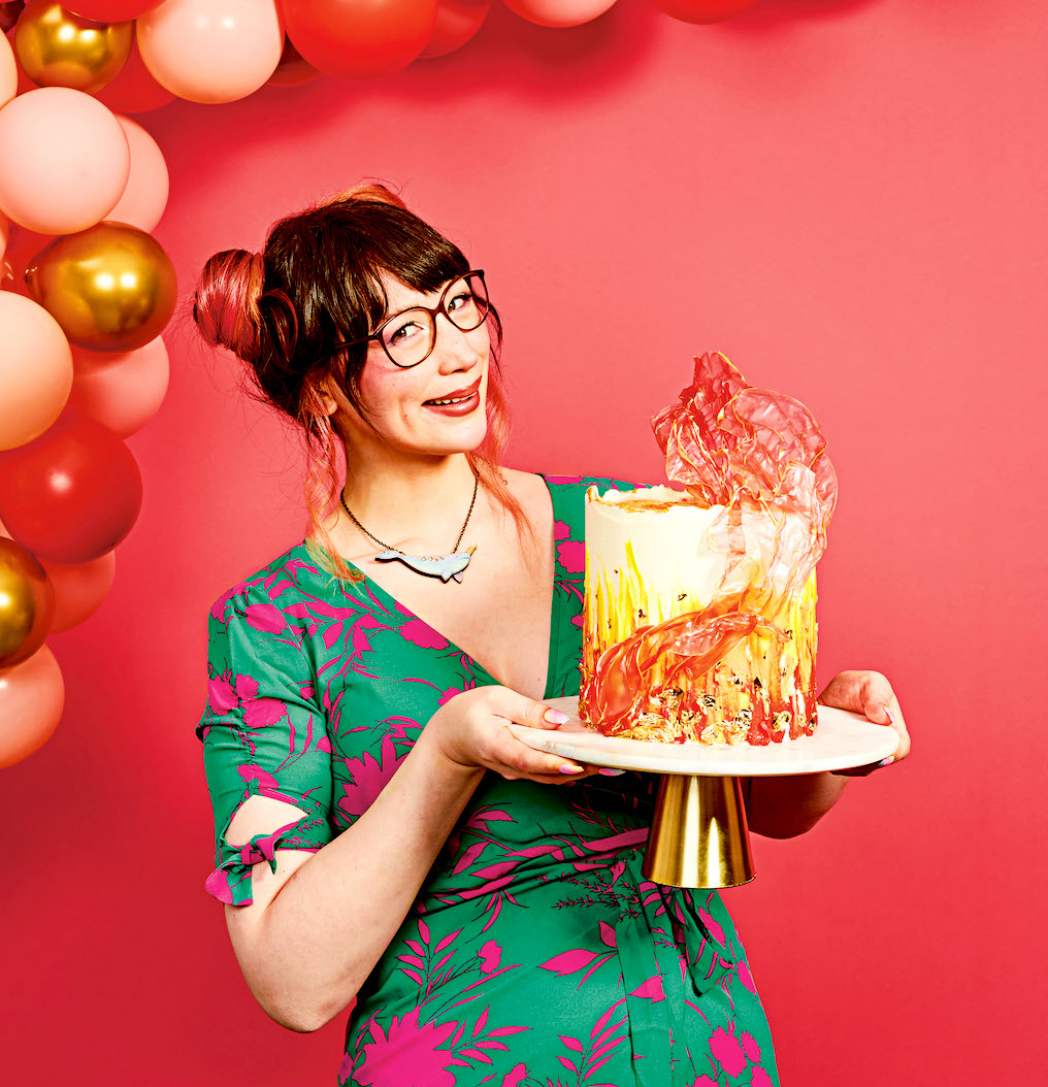 Kim Joy on Life After Bake Off

We spoke to the wonderful Kim Joy about life after Bake Off, her colourful inspirations, and what Paul Hollywood’s really like

Kim Joy was one of our favourite Bake Off contestants! She was renowned for her cute and quirky bakes, and we could never wait to see what creative interpretation of a brief she’d come up with next!

How did you first get into baking?

I don’t have any family or grandparents who are into baking - it’s just me who bakes. It was something I picked up and did off and on. Sometimes life takes over and you bake a bit less, sometimes a bit more. I’m always drawn back to it. There’s a bit of structure in baking, but there’s also flexibility. It comforts you but also lets you explore - I love that.

I also realised that if you bake things and give them to people, it makes them happy! Baking is a way to make people like you.

Your bakes are known for being colourful and cute - where do you get your inspiration from?

Pre ‘Bake Off’ I was interested in a bit of everything, like making croissants over and over to get them right. But Bake Off encouraged that side of me, because the challenges are so out there, like “make a self portrait out of biscuits” . I think baking’s always a reflection of your personality, and I like colour, and cute things.

You used to be a wellbeing practitioner - how do you think baking helps with mental health?

In multiple ways. Baking can help with mental health, but only if you have an interest in it! It’s good because it brings people together, because you can bake things and give them to someone else, which makes them happy and gives you a sense of purpose.

A lot of poor mental health stems from having a lack of purpose. Today, in society, it’s hard to get that sense of purpose. You’re going to work, you come home, and it repeats. Baking is that something extra.

It’s a very special activity. You can lose all sense of time while you do it. It also tunes into all your different senses; smell, touch and taste. It’s accessible as well - there aren’t many barriers to getting into it.

We all have nice memories attached to food and baking as well.

It’s fun, even when things go a little bit wrong. Like magic. When you put something in the oven, you never know how it will transform.

Can you tell me about your experience of the Bake Off?

I found it super stressful, but I knew in advance that I would. And I also really enjoyed it. It’s been so rewarding from me; I’ve gained so much from it and it really helped improve my confidence. I’ve been really lucky.

By the time I got to the final, though, I was so tired. We’re all home bakers, used to making a cake at home. You’ll bake it one day, and finish it off the next - you’d never do everything in three hours. Adjusting to baking to time is hard.

How much did you practice between episodes?

I practiced as much as I possibly could. But once you get home you’re exhausted. I’m lucky because my partner was super supportive. I taught him how to bake; he can temper chocolate, he can make icing. All those things that were repetitive and a bit tiring, he could help me with, and then I could focus on the decorating.

I never did the same bake multiple times, I just made a design and tried it once. As Bake Off goes along, you get pretty good at estimating how long things will take; I’d write a timed itinerary and that would really help.

I don’t have kids or anything, so I had time. But if you have other stuff going on, like stress at work, it can be more challenging.

What have you been doing since Bake Off?

I’ve been doing books. It’s been so exciting. It’s what I love doing the most - my third is out soon. I’ve also been working on making a card game called ‘Kim Joy’s Magic Bakery’; that’s how me and my partner Nabil met, playing board games.

Recently you were in the news for posting a photo of you crying - can you explain what happened?

I’d walked out of an exercise class because it made me feel really uncomfortable. I love going to classes at the gym, but this one was really…not good. The old me wouldn’t have walked out; I would have stayed and pretended not to care about being made fun of. But I thought “I’m not putting up with this, and left.”

You don’t always cry when you’re unhappy; I was crying for the old me that would have stayed. And I was angry - sometimes when you’re angry you need a big cry. I didn’t really expect a reaction: the whole point of posting it was just because I was proud of myself for walking out. To show that we should quit if we can.

It was pretty much the easiest thing to walk out of. A lot of people experience situations like this at work, and you can’t just leave; you need to earn money. So it was a small example, but people really attached to it. I had lots of supportive messages.

What is it like to be a public figure? Does it make a difference to your life?

I’m the same person as I’ve always been, except I’m a little more confident (but still not that much more confident). On the whole, it’s been good. People are generally nicer to me. I try to be nice to everyone regardless of who they are or what they do, but I do sometimes wonder if people are being nice to me just because I was on TV.

It’s a nice show. So when people say hi to you in the street, they always ask you questions like “What’s Paul Hollywood really like”?

He’s nice. Because of the judging, you don’t see that much of them - they have to keep a professional distance. But afterwards, when he’s relaxed and chilled, he’s quite funny.

Kim Joy’s latest book, Celebrate with Kim Joy, is out on the 30th September 2021