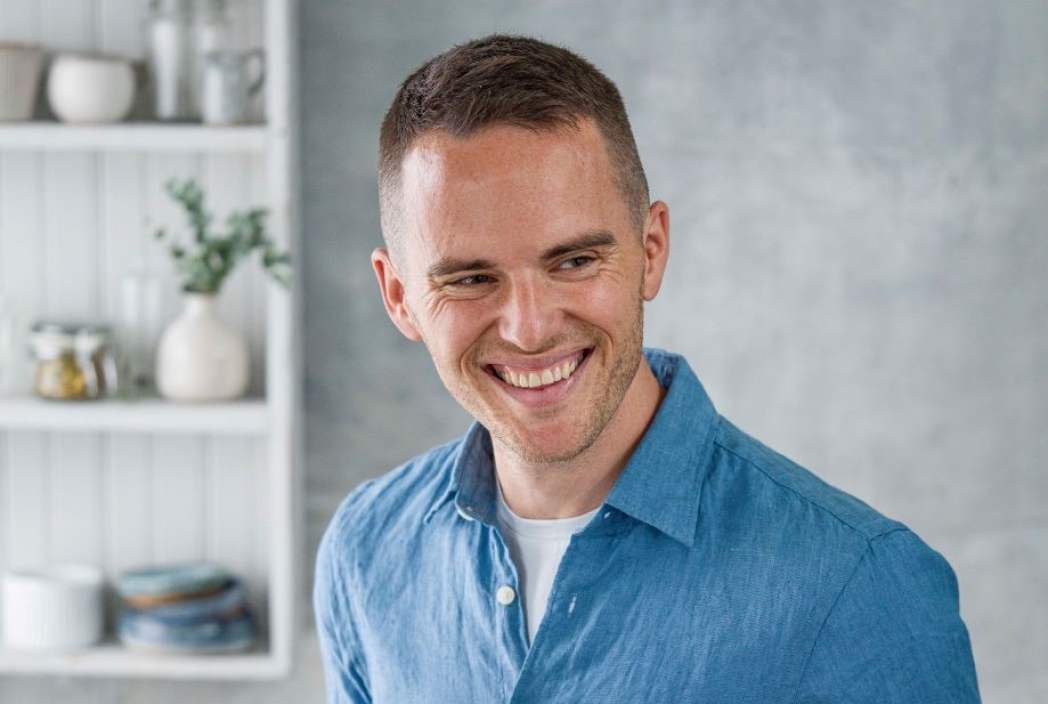 David on a childhood without Coca Cola…

My mum was a real hippie! In our lunch boxes we never had anything like chocolates or crisps, we had dried fruit and nuts. We were a family of seven and she made homemade bread for us every day. We grew all our own vegetables and had chickens in the garden – it was that kind of life.

Healthy food was just normal food for me. Of course we had things like homemade cakes, but as a kid, I never tasted anything like Coca Cola or McDonalds.

On his job as a health advisor…

I work as a health advisor on global charity programmes. I talk to the people who are about to go and work on our programmes abroad and give them a briefing on how to stay healthy. A huge part of that is about diet and nutrition.

For me food and health sit side by side. It’s not just about what food does for your body to keep it healthy, it’s also about how food makes you feel.

I like easy wins! In my new book, there’s a section on salads. Even if you eat unhealthily some of the time you can give yourself a real boost with a big healthy salad.

You can also make healthy switches. For example, you can make a cake with white flour, or with healthier brown flour. Brown flour is very dense and heavy and not very nice, but I would encourage people just to switch out 5% of the white flour for the brown flour. You won’t change the lightness of the sponge, but you’ll still be feeding your microbiome with the brown flour.

Our body is covered in trillions of microorganisms, and the biggest collection is in our large intestine. Those microbes not only keep our bowel healthy, but they also release the hormones our bodies need as they feed. What they feed on the most is something called indigestible starches, found in vegetables, nuts and seeds.

Unfortunately it’s not just as easy as eating one healthy thing. It’s best if you can have lots of different varieties. With the research we have now we know that the people with the most diverse microbiomes are the healthiest.

I have a big glass jar which contains at least 21 different types of nuts, seeds, cacao nibs, and dried fruits. I just put a spoonful of it in my porridge or when I’m baking bread.

On his brand new book, Good to Eat…

I’ve always liked healthy food but have been frustrated with the perception that it is synonymous with tasteless food, and not very nice. The title of the book incorporates my philosophy. The recipes it contains are healthy, but good to eat.

For food to be healthy, you don’t have to take everything away. You can have butter and sugar in a recipe, but have them reduced, and add in healthy elements too. I feel really passionately about this.

Recently, there’s been a big focus on recipes you can cook in the shortest amount of time.

My book has recipes you can rustle up quickly but it also has recipes that take time and that you can enjoy, including a whole section on sourdough. I wanted the book not just to be about quick fixes; it’s about good food, hearty food.

Writing the book wasn’t too difficult. I’m 38 – older than the very first Bake Off winner. This book is a curation of recipes that I cook and bake all the time, and I’m sharing those with everyone.

Being on Bake Off was a 100 percent positive experience. You’re not worried when you apply for Bake Off; it’s a lovely show and you know they’re going to cast everyone in a positive light.

I was incredibly calm and collected throughout. I didn’t really get stressed by it. I worked in emergency units in different African countries, so I’m used to a slightly more high octane work environment.

I’m happy with Bake Off David; I really like who he was. But you have to remember it’s an edit. Human beings are very complex, and they have characters. People in the UK know ‘Bake Off David’ and that isn’t the entirety of who I am as a person, but that’s inevitable.

Every baker in there has a food producer and a camera on them the whole time, and just a showstopper might be five hours long. So if you think of the amount of footage they have, and how they have to reduce that down to make a single episode it makes total sense that they would have to edit it.

They also have to create a sense of jeopardy, so they might not put things in the right order. You aren’t allowed to have a watch on, because if someone saw your watch and the time read an hour earlier then people would get confused.

People got the impression that I was very neat, but when I worked in intensive care I was known for being the scruffy nurse. Everyone else would find it very funny that I was being thought of as a tidy person.

I work really fast, and I tended to finish baking early. You aren’t allowed to leave your bench very much. So I’d just get bored and start tidying it up. That’s why it always looked so clean.

On Jeff Goldblum eating his buns…

The morning after the final, I went onto Zoe Ball’s show and brought in cinnamon rolls, and Jeff Goldblum tried them. It was very bizarre sitting next to Jeff Goldblum.

I would go to all these events, I remember standing next to Stormzy once. But it’s a reality we’ve all seen on social media, and it was surprising how quickly it felt normal.

We’re allowed to apply for Bake Off because we’re amateur bakers, so we’re not allowed to have done courses and stuff like that. But the show catapults you into the professional world of food. A lot of people from Bake Off don’t want to be in that world – they want to go back to their normal life. But I’ve been really enjoying it.

I applied to Bake Off because I think it’s very important to be out of your comfort zone. When people ask me if I want to try something, I normally say, let’s go for it!

I would love it if Strictly Come Dancing called. I would be terrible but it would be fun!