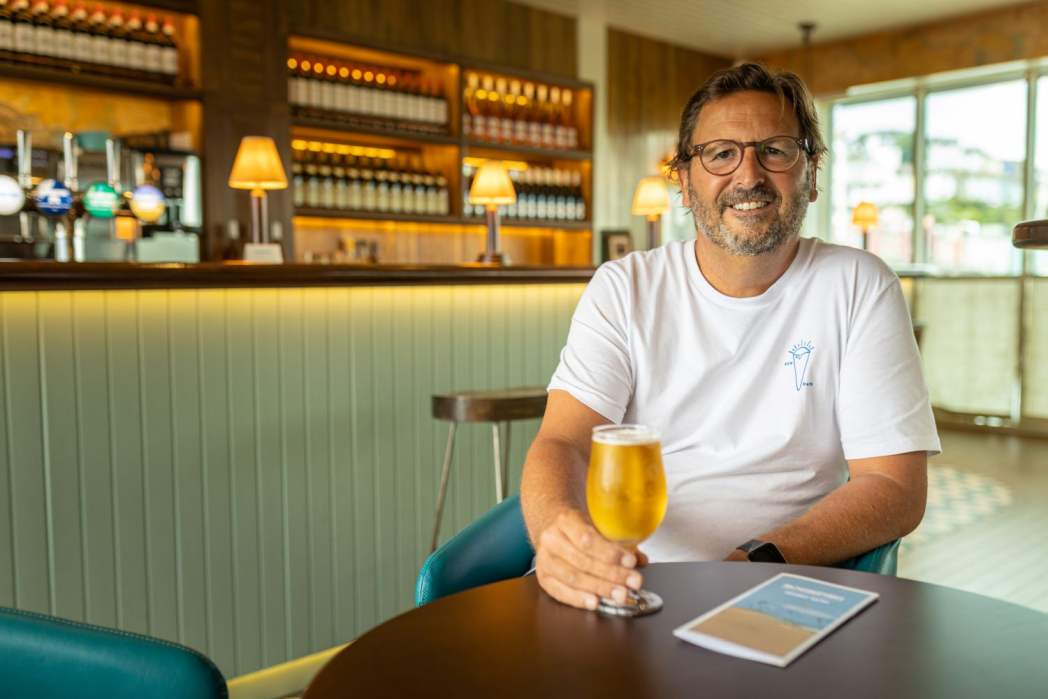 Getting to Know Mitch Tonks

Chef, entrepreneur and food writer Mitch Tonks tells us more about his connection to the sea

Mitch Tonks’ life has been shaped by the currents of the sea. He grew up in the coastal town of Weston-Super-Mare, and was brought up primarily by his grandmother.

“Food was very much part of the council house that we lived in. And it wasn’t so much because she was a gourmet cook but that was just how you existed,” he explains.

“At the age of seven I would go to the off-licence to pick up cider and cigarettes for my mum and my grandmother with a note, and I would also go to the fishmonger. I can remember this incredible smell from in there: it was kind of o-zoney and beautiful, not like fish but shellfish.

“There would be piles of brown shrimps and all kinds of wonderful things, like crab and herring roes. We grew up eating this stuff. I would sit at my grandmother’s table and we would smash crabs and peel shrimps for sandwiches.

“My nan used to have a whole load of people that would bring her things to eat; there were a couple of twins who would come round with eels from the local reeds. My nan would cut their heads off and they would swim around the sink and I would marvel at them, although it sounds barbaric now. Then she would jelly them.” Mitch spent much of his childhood adventuring; building dens in the woods and climbing rocks by the sea shore.

“We walked out to static nets in the mud and pinched dabs, we fished when we could get a rod between us. So everything was really about the sea,” he says.

The Unsavoury Taste of Success

Fast forward a couple of decades and this freedom would have felt like a distant dream. Having had children young, Mitch had followed a career in accounting and building to cover his expenses. But by the age of 27 he was too disillusioned to continue. Interested in entering the food industry, he decided to set up a fishmonger in Bath, where he lived at the time.

“The food revolution had just started. Henrietta Green had just written a book called ‘Food Lover’s Guide to Britain’. All sorts of places were beginning to open in Bath; a cheese shop, a deli. Food was starting to be talked about,” he says.

Mitch pooled his savings into starting up a fish shop, and later decided to open a fish restaurant on the floor above it.

“I literally painted the walls, bought a couple of chairs, put a cooker in. I really didn’t know anything about it at all,” he says.

The next couple of years were difficult, as Mitch devoted himself solely to ensuring that the restaurant ran at a profit. Eventually, after a couple of amazing reviews, it became a roaring success. So much so that Mitch was able to open a second restaurant in Christchurch.

People started taking notice. Investors were easily attracted. He opened his first restaurant in London in 2005. Fast forward three years and Mitch had ten restaurants in London. But he wasn’t happy.

“As success arrives so do new challenges, so you never really arrive at this place of contentment. I felt very disillusioned about the company, and where we’d gone; everything was really about money - it wasn’t about fish anymore,” he says.

And so he upped stakes, leaving his business in the hands of people who then bankrupted it within several years, and returned to Devon to start afresh.

Mitch decided to set up a new restaurant.

“I wanted to create a legacy restaurant, serving simple food, where people could come and eat fresh fish by the sea, where I could express my passion for Italian and Mediterranean cooking, and be a chef for the rest of my life.” It was called The Seahorse, and was opened in Dartmouth. But it wasn’t long before Mitch had an idea for a second restaurant.

“After a couple of years I decided that seafood in Britain needed a change. You could eat seafood at fish and chip shops, and then at places like Rick Stein’s and Nathan Outlaw’s. But you needed a place in the middle, where your children could come and go. I opened the first Rockfish in Dartmouth, which set out to bridge the gap between the two,” he explains.

“It wasn’t about money – it was about doing something really well. About creating a place where families can get together and enjoy fresh fish and seafood next to the sea. Where we can work with boats, and with local communities to put these amazing restaurants in their towns, and create a destination out of seafood.” Mitch is now about to open his tenth restaurant and his business now employs three hundred people.

“I have a clear mission,” he says. “I want to change the way people experience seafood and fish at restaurants and in their homes in the UK. I also want to expand on our community work. Some of the stuff we’re doing is putting sea litter bins in the harbours that we’re in so that we can take plastic out of the oceans, and we’re building a big blue whale statue in the breakwater in Brixham and filling it with plastic to highlight the problem.” Mitch is also an ambassador for the Marine Stewardship Council, and is passionate about supporting the British fishing industry, especially in such difficult times A couple of years ago, he invested in a friend’s fishing boat, which now bears Rockfish branding and delivers fish directly to the company’s restaurants.

“Lockdown kickstarted the delivery service we’re establishing now. Our skipper, Nick, was only making a couple of hundred pounds per haul, because there were no restaurants and no export market for the fish.

“I sent an email to our people, telling them that the boat would be at the pier, and telling people to turn up with carrier bags. It was really successful – there was something very joyful about buying fish straight from the boat,” he says.

Following this, Rockfish set up a restaurant box scheme, selling smoked salmon, scallops, sardine and turbot. Mitch has now set his sights on creating a virtual seafood market, where users will be able to buy first sale fish directly from fishermen and merchants. A launch date is scheduled for June.

For Mitch, it couldn’t have come at a better time.

“Sainsburys have got rid of their fish counters. And this is the time to eat British fish. Brexit means our fishermen haven’t got access to the European markets like they used to and fishmongers are few and far between –the biggest problem with people eating seafood in this country is getting it,” he explains.

“I feel content. I don’t need any more money, but I’m not rich. I don’t need a bigger house, but neither am I in a big house. I have five beautiful kids that fulfill me, an amazing wife, family, all of that stuff, a boat that I can go on – everything’s fine. So therefore my focus is on helping other people and allowing the organisation to achieve its best,” he explains.

“But I’ve had to go through 27 restaurants, several TV series, and 7 books to realise that this is the definition of success, and it isn’t about money, or a full restaurant or anything else.”