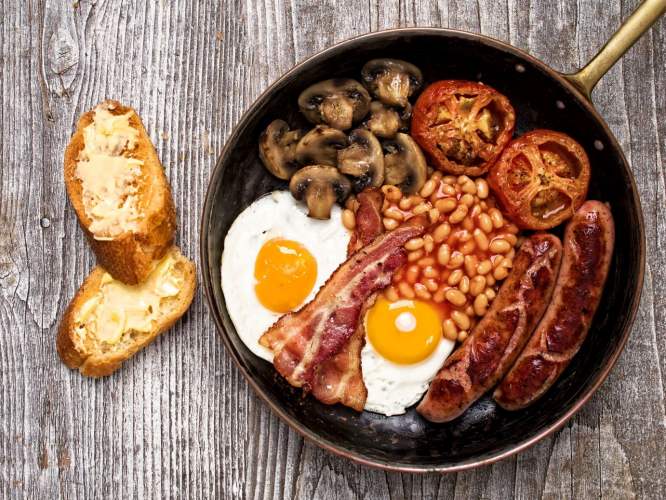 Despite the arrival of hip new dishes like smashed avocado, flat whites and bircher muesli, the traditional fried breakfast continues to be the most popular British breakfast, new research by Park Resorts has revealed.

The survey of 2,000 UK adults looked into what the British public prefer to break their morning fast and settles the debate on the essential ingredients to create the perfect fry up.

Over a quarter of Brits love to tuck into a fried breakfast (27%), with the simpler choice of cereal taking second place (16%) in the title for the UK’s favourite breakfast. Toast was the third most popular meal to start the day, with one in ten (10%) Brits choosing it as their number one choice.

The Great British Fry Up

The five most popular items to make up the perfect fried breakfast were sausage, bacon, fried egg, baked beans and mushrooms, but it seems each region has a difference of opinion on what they would choose on their plate.

In Northern Ireland, 40% of Belfast residents felt a fry up wasn’t complete without potato bread, while Brummies were the biggest fans of vegetarian sausage (38%).

The rather unhealthy choice of fried bread was chosen by more Cardiff residents than any other city. Over a quarter of Dublin residents picked white pudding as a breakfast favourite, and black pudding was rated most highly by Edinburgh.

One in ten Glaswegians love haggis as part of their breakfast, a quarter of Leeds residents chose the simple white toast as their top choice, and one in ten Liverpudlians went for the slightly more healthy wholemeal toast. Some 21% of Londoners prefer cooked tomatoes, while half of Manchester residents would add mushrooms to their dream fry up.

Unsurprisingly, the survey revealed that Londoners were most likely to choose the trendiest breakfast on the menu, with more people in that region choosing avocado on toast than any other region.

Further analysis of the research shows:

Breakfast tea was the firm favourite as an accompaniment drink, with 40% choosing the British classic as their favourite morning beverage, followed by orange juice with 9% of the votes and americanos as the UK’s third favourite breakfast drink (8%).