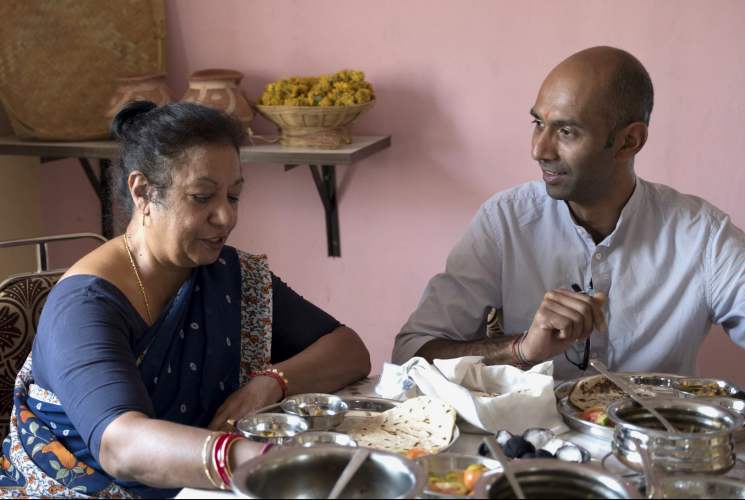 How were Borough Market’s traders influenced by their mothers and grandmothers? Clare Finney finds out

There is a recipe my brother and I will cook all our lives; will entrust to our offspring and forever guard against outsiders. It is our mother’s cheesy pasta with peas and sweetcorn. Oh sure, it sounds easy—but only with the right pasta shape, a suitable strength of cheese and one very special, secret ingredient can you recreate the cheesy pasta of our childhood. Through it we learnt not just the trick to making a good roux and an appreciation of good cheese, but the delicate interplay between the thickness of the sauce and the shape of the pasta.

It was with this in mind that I approached Borough Market’s traders in the run up to Mother’s Day. How had their mothers and grandmothers shaped their culinary futures? What role had these women played in the products and philosophies of various stalls?

From Italian nonnas to British mums, there is no denying the maternal influence in the Market. “My mum and my gran were the greatest food influencers in my life. They taught me everything: recipes, tricks, traditions, preservations, seasonality,” says Marianna at Oliveology. In Greek culture, food is a predominantly female preoccupation, and her stall is a living testament to the influence of the women in her life: olives, olive oil, herbs and wine that she grew up on, produced on her family’s farm in Greece. “All this inspired me and guided me in the values that we want to come across, through Oliveology, to the public,” she says proudly.

Olive oil also runs in the blood of Luigi at The Olive Oil Co: “I am from Puglia. My grandmother was a chef,” he smiles, “and I remember when I was very young she would give me bread and olive oil to keep me entertained in the kitchen—and out of her way. My mother didn’t really cook. She wasn’t very interested.” His grandmother, however, would ply him with “different combinations of flavours and new recipes”.

Our mothers and grandmothers often hold sway in our relationship with food: and for that reason, it is deeply emotional. What they cook, how they cook, and how they involve us in the process forms the bedrock of our culinary lives. When Urvesh’s mother Lalita Parvais arrived in the UK from India in 1968, it was her recipes that brought her solace: the mung bean dal, chapattis and bhujia passed down to her through the generations of Parvais females. “In a winter not dissimilar to this one, food was a sensory, nostalgic journey,” explains Urvesh (pictured above with his mum, Lalita).

When he came to establish Gujarati Rasoi, it seemed only natural that he draw on his heritage—his “time capsule food”—in order to provide as true a taste as possible of rural Gujurat. “My great grandparents lived in east Africa for years before moving back to India. Then my mother and grandparents moved to the UK in the 1960s. Any alterations or twists in these recipes would automatically mean it wouldn’t have had the same nostalgic hit,” explains Urvesh.

No Tradition for Cheese

Meanwhile, in Zambia, Bill Ogelthorpe’s parents’ attempts to recreate the dishes of their Swiss homeland were frustrated at every turn. “My mum and dad grew up in Switzerland, so they were always trying to make fondue. But there is no tradition for cheese in Zambia. The climate is too hot. It was difficult to find it.” More often than not, the Oglethorpes would be reduced to mixing “some sort of cheddar and beer, or whatever they could find,” he laughs—wine being equally rare. “The Swiss would have died if they’d seen it.” Still, the young Bill must have tasted enough potential in the melting pot for him to embark on a stellar career in Swiss-style mountain cheeses, sold at Kappacasein.

As Nigel Slater will forever attest, culinary greatness can also be born out of a quest to better your childhood experience of food. “We tried to make baguettes once. It was an absolute disaster,” grins Matt Jones, founder of Bread Ahead. “Mum was a great home cook, however: lovely Christmas cakes, great puff pastry for sausage rolls, an amazing carrot cake. She was a big culinary influence and we were always experimenting together. It made me want to get into this world.” He’s got the recipe for the carrot cake. It appeared on the stall a few years ago and may well appear again.

The stories and recipes linking traders to their mothers and grandmothers are as diverse as they are many—yet one thing strikes me in particular. None of them—the chapattis, the cakes, the fondues, the koftas—are particularly complicated or unusual. “There is a dialogue that takes place between someone cooking food for someone they love and the eater, which is not verbal,” Urvesh exclaims feelingly, of his family’s hot mung bean dal. “It is affection, love, warmth, anticipation—all those things in a mouthful.” I think of mum’s cheesy pasta: zinging with peas, juicy with sweetcorn, the golden, cheesy strands stretching with each steaming forkful, and I am not just full and happy—I am home.

Why not treat her? 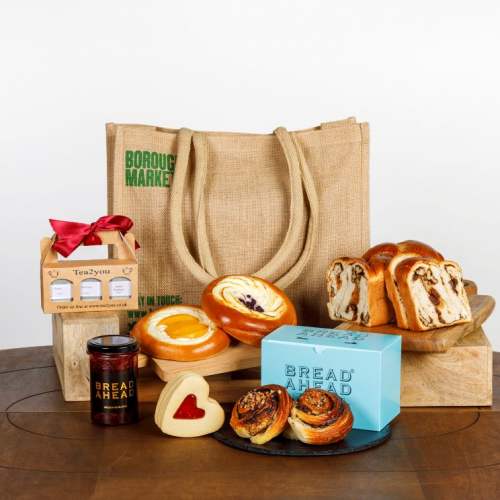 Borough Market has recently launched a range of five specially curated Mothers’ Day hampers, which can be delivered nationwide in time for the special day. We like the look of the ‘Afternoon Tea Hamper’, which contains freshly baked Babka buns, raspberry jam from Rosebud preserves, and much more!