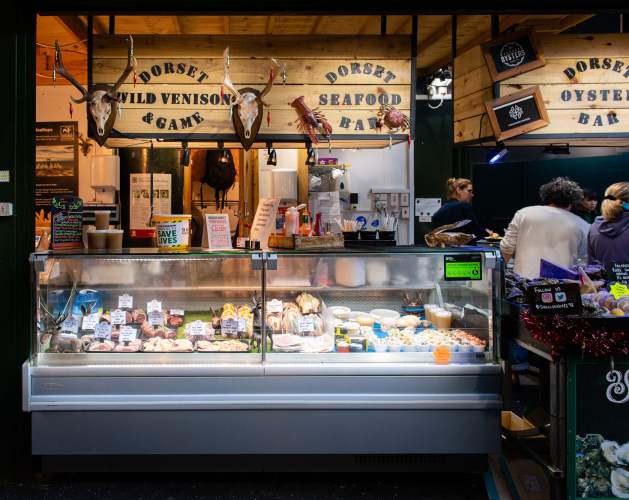 “It’s all about the season. And by that, I don’t just mean the weather,” says Darren Brown of Shellseekers Fish & Game, when asked what’s good on his stall in February. “It’s also about traceability and sustainability.”

There’s always a deer population that’s ‘in season’ in this country, he explains, with timings based on the need “to allow them to breed, not leave orphans on the ground and control the herds properly”. Right now it’s sika deer, come April it’ll be roe.

There are good reasons for making the most of the venison at Darren’s stall right now: there’s a glut, he says, and “we need to eat our problems”. Managing the deer population in the UK countryside is vital for ecosystem balance, but this year the task has been complicated by the simultaneous impositions of COVID-19, which has meant recreational shooters are unable to get out (Darren’s work is essential for his livelihood and therefore allowed under current government guidance), and Brexit. “Nothing is going abroad and we’re not big venison eaters in this country,” he laments – but we should be.

Not only is eating venison an ethical option (deer, which have no wild predators, will always have to be culled to prevent populations running out of control, so it seems only respectful to utilise their meat), but it couldn’t be further in character from the intensively farmed meat often found in the supermarket. It is truly ‘free range’. “It’s untouched by human hands. That means no preservatives, additives or growth hormones.” Better yet, it’s delicious: venison is rich, flavoursome and naturally lean, and sika carries a good layer of fat, making it perfect for winter stews. Alternatively, use the loin to raise your wellington game – be sure to grab some amazing mushroom pâté from Borough Market’s Pâté Moi to use as the duxelles, too.

If you’re unsure which cut works best for the dish you have in mind, just ask the team behind the counter. Shot by Darren himself down in Dorset and brought to Borough fresh and whole, the animal is butchered on site, meaning all cuts are available. “It makes for great theatre,” says Darren, “but it also helps people to think about where their food comes from. That’s what we’re here for.”

To find out more about Darren and his stall, click here.