“It’s the location of the fields that makes Jersey royals special,’’ says Charles Foster of Turnips, looking out over the family business’ display of this highly sought-after seasonal delicacy. “They are grown on steeply sloping fields – known locally as côtils – usually overlooking the sea.”

As with any kind of root vegetable, so much depends on the soil in which they are grown. One of the key factors in developing the Jersey’s characteristic flavour is that they are traditionally fertilised with seaweed gathered from local coasts. This transplants salt and minerals from the sea into the soil, which helps flavour the potato while it’s still in the ground. “This sometimes surprises people, because salt isn’t usually conducive to growing crops,” Charles continues. “But the soil there is sandy which ideal for growing potatoes and you get the sea air constantly blowing across the fields. All these things combine to make a really delicious potato.”

There are three distinct phases to the Jersey season: early, mid-season and late. Crucially, the flavour can change between the three. “The early crop, the very first ones that come out the ground, are usually helped along a little bit by some kind of polytunnel. These protect the potatoes from the cold winds and create a slightly warmer environment than the open fields,” Charles explains. “It is very labour intensive because harvesting is done by hand. Not very many of these can be produced, so they are not as well known, but they have a lovely delicate flavour.”

This is followed by the mid-season crop – “the Jerseys that people know and love.” The mid-crop makes up the majority of the Jersey royal season, which lasts a minimum of three months. Charles calls these potatoes “superstar British vegetables”, because of their huge popularity and special place in people’s culinary year. “Customers will literally plan events around the arrival of these potatoes.” Things change with the late season crop, many of which come from flat fields as opposed to the steep côtils. “These are still really nice potatoes, but they have a slightly different flavour to the early and mid-crop Jerseys. Definitely worth trying if you have not had them.”

When it comes to storage, Charles advises that while you can put them in a fridge, you really don’t need to. “It just needs to be a cool, dry place. Put them in the larder and keep it dark,” he explains. “The enemy of potatoes is light; it makes them green. If your potato is soft, even when it sprouts in, it’s still good to eat. But when you see that slight green tinge on the skin, that’s when you’ve lost it.”

So how does Charles like his Jerseys? “When you get to the upper echelons of the fine dining world, they can take it to the next level. But for me at home – boiled with a little pepper and butter. That really brings out the flavour of the potato. When they are as nice as this, that is all you really need.” 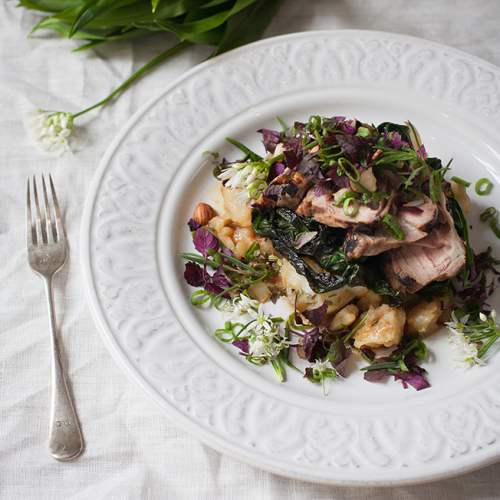