Borough Market Diaries: behind the scenes at Bread Ahead Bakery 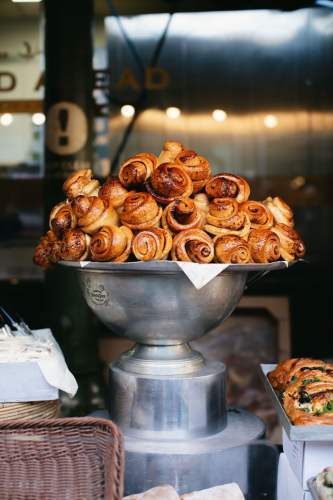 In the second of a series of weekly columns, Darren Henaghan, managing director of @boroughmarket takes us behind the scenes of iconic bakery Bread Ahead to see how the owners are adapting and thriving under lockdown

Homely, heartening and fundamentally human—is it any wonder that bread and baking have seen such a resurgence of interest in recent weeks? It would seem, certainly if you engage with social media in any way, that anyone who hasn’t been busy trying their hand at baking has been busy eating the results of someone else’s endeavours, or embarking on another epic quest for flour.

This growing public interest in their craft has had a notable impact on Borough Market’s bakers, prominent among them Matt Jones, founder and director of Bread Ahead Bakery & School. In the nine weeks since lockdown began, Matt’s Instagram Live baking lessons have seen tens of thousands of home bakers adding themselves to Bread Ahead’s following, and his posts have had record engagement.

The bakery school has moved to Zoom, but the bakery itself is still operating at Borough Market, and sales of freshly made bread and bags of flour (Bread Ahead was one of the first bakeries to step into the breach on the flour front) have been strong in the Market itself, which has remained open for produce shopping, and through Borough Market Online and the business’s own delivery service.

But it’s not all been good news. Bread Ahead’s business model, like that of many of the Market’s traders, was previously heavily dependent on wholesale customers, including the restaurants whose doors remain firmly boarded up. Flour sales, Instagram followers and online baking classes can’t quite disguise a difficult commercial reality: one in which staff have been furloughed and takings have plummeted.

“Having an online audience is a great opportunity, but what we now have to do is convert some of that into a paid channel,” says Matt. “We are building, but it takes time—and in the meantime, our wholesale has disappeared entirely.” Home delivery orders have centred on flour. “That is what everyone wants,” he continues—and he’s not complaining, though it is “very, very low margin. The online sales have meant we can build a database, so we’re on people’s radar in a way that we weren’t so much before.”

One thing he hasn’t been selling—or at least, not on the same scale—is Bread Ahead’s now legendary doughnuts. “It’s all about bread, on the stall and on social media. The doughnuts are hardly talked about. It’s quite nice, actually,” he laughs. “We are a produce market and it’s great that shopping at Borough has become more about produce again.”

For now, Matt is focusing on baking, the Zoom classes, social engagement (“a full-time job in itself!”) and arranging deliveries around London. “It’s been a bit of a nightmare learning lots of new tricks, but we’re getting the hang of it. We’re building a strong platform so when we are doing new products, we’ll have loads of new customers to announce them to!” In the meantime, what matters to him—what matters to all our bakers at Borough Market—is that the essential nature of bread has been restored. “It’s become a key part of people’s lives again. And that’s great.”