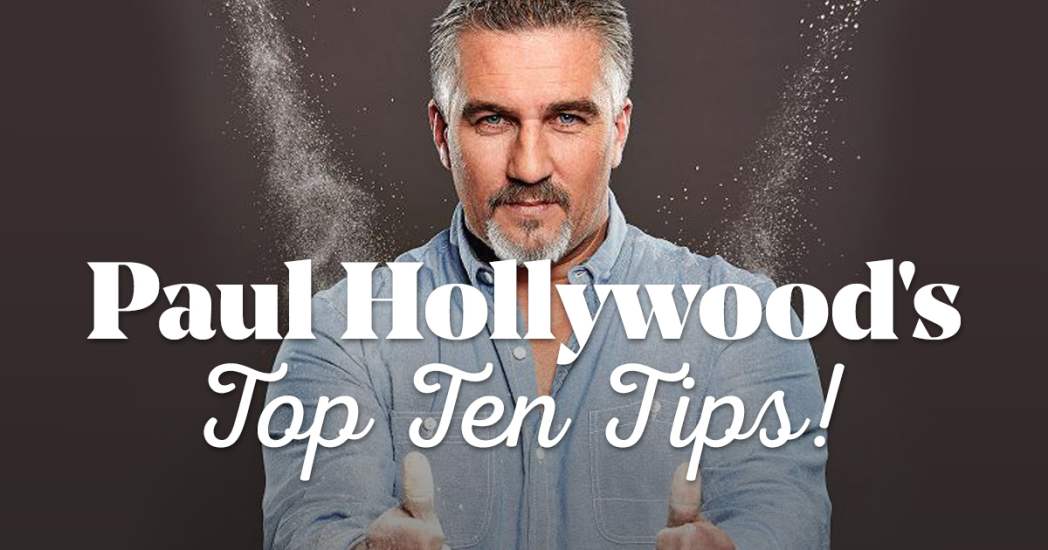 Be a better baker with these essential tips from Paul Hollywood

Great British Bake Off judge and the nation’s best-known baker, Paul Hollywood reveals his tricks of the trade…

1. A lot of people tweet me and ask about baking – and the majority of mistakes I come across are to do with the weighing up. My first piece of advice is to use digital scales. You simply can’t be accurate with balance scales.

2. The next thing is clean your oven! And not just the glass on the outside – clean the inside really thoroughly, because otherwise you get a carbon build-up around the inside, the heat can’t circulate and you get hotspots. Which means an uneven rise.

3. I am forever fighting with Mary about scones. She comes from the tradition of using plain flour in scones but in the professional industry you use strong flour. When you make scones with strong flour you’ll see the difference!

4. Also, on the topic of scones – I like to make my dough, cut out the scones and then put them in the fridge. Chill them for an hour and then, just before you put them in the oven, flip the scones over on your tray. You’ll see your sides will be absolute dead straight when they come out of the oven. It’s little things that make all the difference.

5. The key thing when baking is to read your recipe very carefully. How many times have you heard Mary say ‘read it twice!’ Because if you read it you can’t go wrong. Particularly with baking – you can’t mess around with the measurements. I’m guilty of it as well – I’ll pick up a recipe and think ‘ah, I know what they’re doing here’ and skim read it, then make my own thing which ends up being nothing like the recipe because I’ve missed the critical step!

6. Get your hands into your mixture and get a real feel for the texture. Your mind locks-in to what it should feel like and that’s so much easier to measure than just judging by eye. Whenever you can, get you hands in the bowl. The beauty of artisan baking is that it is handmade – that’s all artisan means. Artisan is used very lightly these days– but it means made by hand.

7. Bread is one of the hardest things to bake consistently – because it is so affected by its environment. The water, the air temperature, your hand temperature all change the dough. I like to use oil in my breads, I started doing it when I was living and working in Cyprus and never really stopped – I think it’s healthier too.

8. And always use cool water in your bread dough– not warm. You might read to use warm water in some recipes to ‘activate the yeast’. But I want to keep the process as slow as possible as that’s when the flavour develops, over the time. Sometimes in the summer I even use iced water – the longer it all proves and ferments the better the taste.

9. And you must mix your yeast, flour and water properly – to get the whole dough wet, that’s a very common mistake that will give poor results.

10. Don’t put bread dough in a proving drawer – put it somewhere cool. We only use proving drawers on the Bake Off so that contestants can get everything done in time. Put your mix somewhere cool with a bag over the top and wait for it to double in size slowly – again, that’s where the flavour comes from! You want to keep it covered so that the air doesn’t get in and form a crust, which slows the dough from rising.