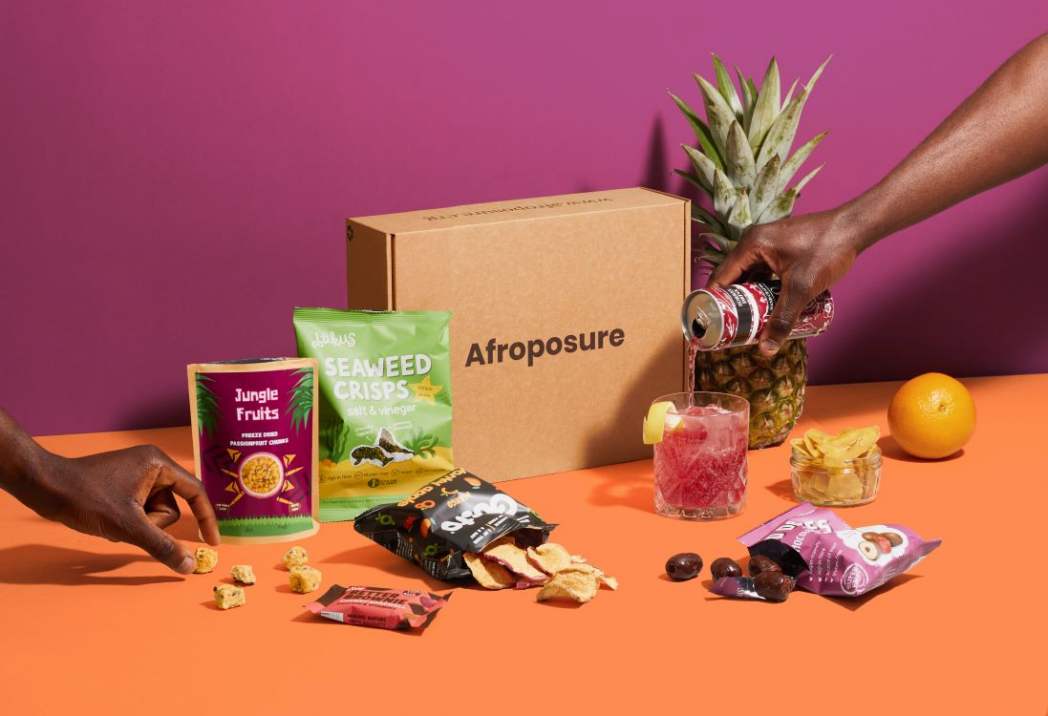 Meet Afroposure, a marketplace for black and ethnic minority food businesses in the UK

Josh Okitikpi and Ayo Dada, the entrepreneurs who co-founded Afroposure, are tackling diversity one tastebud at a time

Last year, university friends Josh and Ayo decided to buy a vending machine in order to provide themselves with passive income. But their desire to fill it with snacks created by diverse artisan producers led them to develop an entire business around this idea.

This is their story.

How did you come up with the idea behind Afroposure?

Ayo: We met at university; our relationship developed afterwards. I have a computer science background and Josh studied finance, and then went onto do a law conversion. Not the traditional entrepreneurial background.

We’ve always had an interest in startups. I used to work for the government, helping startups to internationalise for a TI, and now I work for Virgin Startups.

We read a fantastic article on vending machines last year. They’re really big in Japan – we read a statistic that there’s one for every twenty three people. It sowed seeds and we wondered about getting a vending machine and putting snacks in for some passive income.

But we decided if we did this, we should do it with impact. If your business isn’t changing the world, what’s the point? So we decided to fill the vending machine with snacks developed by diverse founders. We looked at the landscape and realised there was nobody else doing anything like that. We thought, “maybe we’ve found a niche.” Let’s really push forward. Then we thought, “how do we build a business around this”?

When we looked into it, we realised that there was a lack of support for black and ethnic minority food business founders, and we wanted to move the needle and give them exposure.

Josh: It wasn’t just starting a business with a mission at its core for the sake of it; this is something that has impacted us both. And this is off the back of all the conversations that were being had last year about race and ethnicity and what it means in society. It fell into place quite nicely, teaching us more about diversity, or lack of it, in the food and drinks space.

We had one fact that we sort of built the business around – 7.1% of business owners in the UK are black or ethnic minority, and that’s not reflective of our society.

Ayo has a quote, and I don’t know if it’s his or someone else’s: “you can’t be it if you don’t see it.” We wanted to create this amazing discovery platform, showcasing the food and drink of diverse entrepreneurs and to inspire the next generation.

In the US there’s an amazing initiative set up by Aurora James, the 15% pledge, calling on retailers to commit of 15% of their shelf space to black owned businesses. We’ve taken this idea to another level. It’s not just for black founders, but other ethnic minorities.

Why do you think so few business owners in the food industry are from black and minority ethnic backgrounds?

Josh: We think there are a few reasons: a lack of funding, a lack of exposure and a lack of accessibility to opportunities, and that’s what we’re trying to tackle with Afroposure.

Ayo: By lack of access, we mean access to funding, markets and networking. I see this in my day job; if you give opportunities to entrepreneurs from all spheres, the by-product is success in the long run. Research has shown that black and ethnic minority founders tend not to have this access to opportunity.

Josh: There really isn’t much out there. One barrier to entry we’re exploring is “why aren’t people even starting on this journey? What’s the barrier there?” We wonder if it might be due to their socio-economic standing. Starting a business is expensive.

Can you tell us about some of the brands you represent?

Ayo: Abakus Foods was started by Helen Wang. She used to work long hours in finance and her health was deteriorating. Her mum used to send her care packages containing healthy snacks, such as red dates and seaweed crisps, and she loved them so much she decided to make them available here.

I came across her three years ago, and it’s amazing how much she’s scaled the business since then. The branding was going through these growth pains and she was experiencing a lack of exposure or opportunity – people weren’t seeing her product. She joined one of our programmes and accessed some funding, which has helped her. Now she’s in Sainsburys.

Ilé Adùn is a confectionary company selling coconut toffee. It’s a side hustle for the founder Ayesha, but the business has got so much legs it’s interesting to see where it might end up.

Jungle fruits was founded by Mani & Sam, two brothers from South London. They set up Jungle Fruits to inspire communities by making super fruits more accessible and more affordable to people from their background.

Phil Udeh started Füd because he struggled from chronic fatigue due to his sickle cell anaemia. When you set up a business it’s from your experience and pain points. So, he decided to develop a healthier alternative to traditional energy drinks.

Josh: We have products from entrepreneurs at different stages in their journey, which I think is really great! Abakus foods are at one stage, and then we’ve got Ilé Adùn or Jungle Fruits, created by Matt Mani & Sam, who are newer; this is a great opportunity for them to be on a platform with bigger brands, that have reached a stage they want to get to soon.

Can you tell us more about your 5% pledge?

Josh: We want a 360° approach to making an impact. We will donate 5% of sales into a fund, and each year award a grant to a budding entrepreneur for them to start their own business. Obviously, the size of the fund is going to depend on how successful we are through the year.

We do really want to showcase this side of the business, so we’re trying to see how we can make it as impactful as possible. This isn’t just in regards to the grant, but in trying to link up with other organisations for guidance and advice, and link up with people who don’t think it’s possible to start a business. It’s the support side we’re really going to focus on.

Where can consumers get hold of Afrosposure’s snacks?

Ayo: The business operates online and offline. You can buy snacks individually online, or order a snack box selection or a subscription.

We wanted to change the way the brands are positioned to the end consumer. The person on the street isn’t going to know about Abakus, for example, our online presence and our vending machine provides different points of exposure.

Josh: The vending machine is located in Peckham Levels, an amazing coworking venue, with lots of restaurants and bars. It’s owned by Makeshift and they’re really keen on reinvigorating Peckham; the Levels is for Peckham and by Peckham. We’d love to make our vending machine full of snacks solely from Peckham, but that’s a long way in the future.

What are your plans for the future?

Josh: There’s the funding and the grant aspect that we really want to roll out in the next 12 months, there’s building out our online presence, having more brands and products.

Hopefully the vending machine is a success – if it is, we want to get a few more out to other areas.