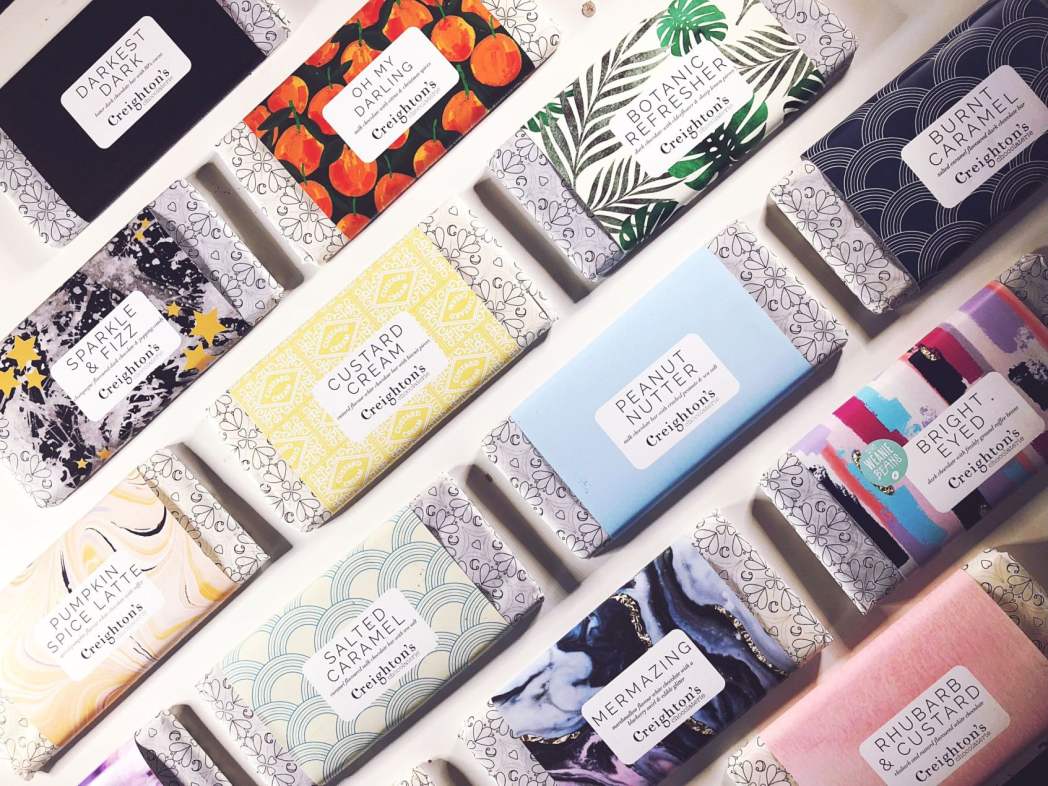 9 British craft chocolate bars you have to try

When you think of British chocolates, confectionary such as Double Deckers or Quality Streets come to mind. But Britain’s chocolate industry isn’t just about Dairy Milk! Within the country there are plenty of chocolate artisans producing small-batch chocolate confections, with high-quality, provenance and fair trade forefront in their minds. 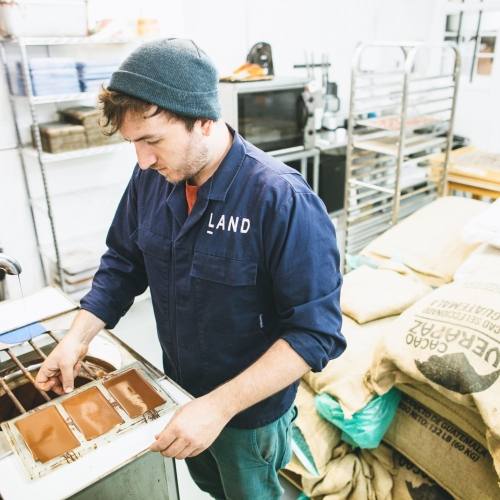 In 2013, fresh from travelling Central America and a stint working on a cocoa farm, Land’s chocolatier Phil Landers switched a career in radio to set up an artisanal chocolate company. Today, from his workshop in East London, Phil – who has worked with chocolatiers such as Paul A Young and Mast Brothers – hand sorts his cocoa beans before roasting, cracking, winnowing (where the outer shell is removed to reveal the cacao nibs that make the chocolate), grinding and conching them. Despite this intricate process, Phil single-handedly is able to make up to 60kg batches at a time, twice a week.

While he creates single-origin bars from around the world, Phil also collaborates with local producers as much as possible; Land’s 65% Malt Dark Chocolate bar uses malt barley grain from East London brewery Pressure Drop. He also works with a local forager, Jon the Poacher, to source London-based ingredients such as cobnuts, fennel and alexander seeds, and is planning on producing some seasonal collaborations in his British chocolate bars. Fan of hot chocolate? Phil supplies London hotspots Pophams Bakery and De Beauvoir Deli to name but a few outlets. 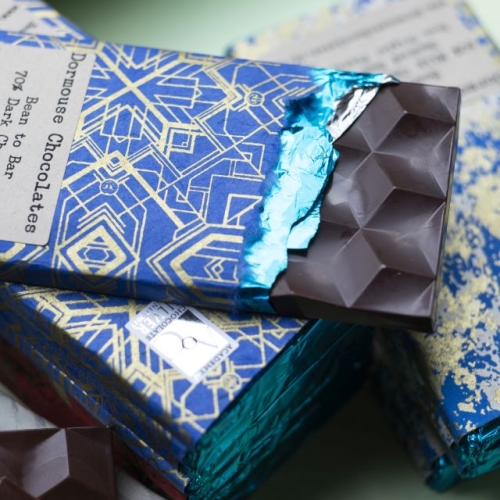 Dormouse Chocolate founder Isobel Carse began making artisanal chocolate bars in 2015 in her kitchen at home, where everything down to the peeling of beans to making cocoa butter was completed by hand. Now operating out of Manchester’s Great Northern Warehouse, Isobel produces micro batches of quality chocolate of around 3-10kg, up to three times a week.

Core ingredients are kept simple: just cacao, sugar, and organic milk powder, but she also creates a number of limited edition and seasonal bars, wrapped in beautiful paper. The Christmas stollen bar – which contains roasted almonds and cherries – typically gains a long waiting list from as soon as October, so be sure to register your interest early. If you’re a fan of white chocolate, Dormhouse’s 39% Madagascan Toasted White, which is made with caramelised milk powder, is a must; it was the only white chocolate bar to be awarded gold at 2018’s Academy of Chocolate Awards. 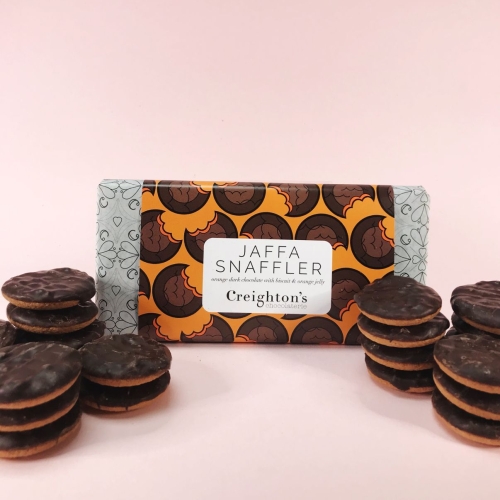 Mother-daughter duo Andrea Huntingdon and Lucy Elliott, otherwise known as Creighton’s, are celebrated for their small-batch, handmade artisan chocolates and their innovative flavour combinations which cover include anything from retro biscuits to ramen.

The all-female team of five has been crafting chocolate since 2010 and now produce up to 10,000 bars a week, with all of the work save the chocolate tempering undertaken by hand.Their fun and brightly designed bars contain ingredients from all over the UK, from Maldon sea salt to Yorkshire biscuits, Scottish edible flowers, and coffee beans from Bedfordshire roasters. Don’t miss the Spoon of Cereal bar of chocolate, containing marshmallow- flavoured white chocolate and cereal hoops, while gin lovers will need to check out the Pink Gin chocolate bar which is made in collaboration with London jewellery makers Tatty Devine. 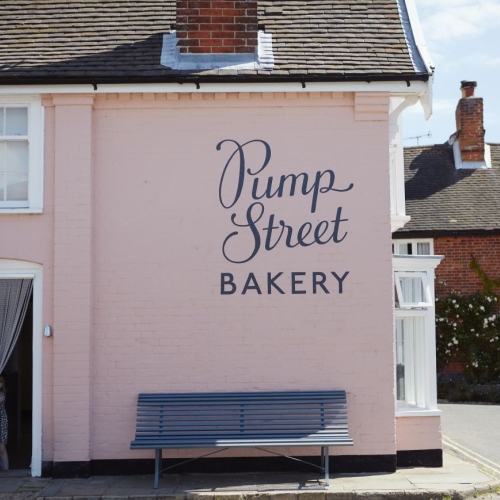 First and foremost an award-winning bakery based in Orford, Suffolk, Pump St is also a chocolate shop producing some outstanding small batch bean-to-bar chocolate, which equally has scooped up a whole host of accolades. Like its bread, Pump St’s chocolate celebrates the concepts of locality and terroir, as demonstrated in the close-to- home ingredients which feature in its British chocolate bars, such as the bakery’s sourdough or rye breadcrumbs. Love cakes and chocolate? Don’t miss Pump St’s limited edition Eccles 55%, Panettone 70%, Brown Bread 40%, and Hot Cross Bun 58% bars. They also have a delicious hot chocolate range. 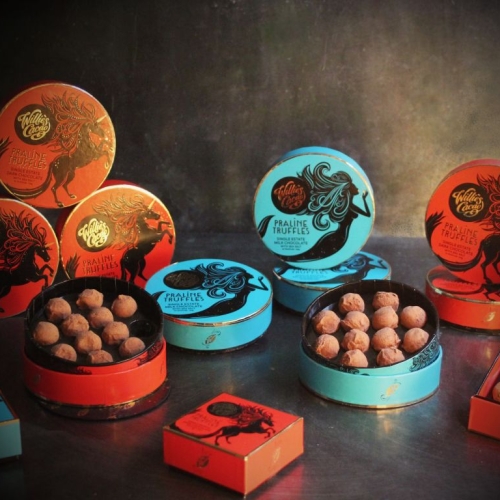 In spite of producing a range of more than 25 products, chocolate maker Willie Harcourt-Cooze still retains a humble approach to his craft, enlisting a series of antique machines (which are prone to breaking) to create his chocolate. Using 100% natural ingredients to make small-batch bean-to-bar chocolate is his ethos, as is a painstaking attention to detail: each bar of chocolate is tried and tested at every stage of the process, meaning it can take up to 21 days to make each batch. In addition to truffles and British chocolate bars, Willie has also launched a launched a hot chocolate range. 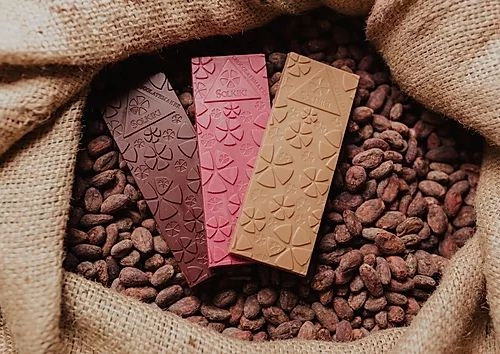 Solkiki’s founders Iris and Bob have pocketed a wealth of accolades for their vegan bean-to-bar chocolate since officially launching in 2015, amassing more than 70 awards internationally to date. Their core range of micro- batch, heirloom chocolate and single-origin bars – which is made in a building powered by renewable energy – spans more than 40 bars including white, milk, dark and ultra dark. That said, they specialise in creating micro-batch chocolate, with batch sizes of less than 50kg, and produce approximately 400 batches a year. On top of being hands-on with the chocolate making process, Iris and Bob grow their own Aji limon chillies to use in their bars and also source local Dorset ingredients including apples and even CBD oil. 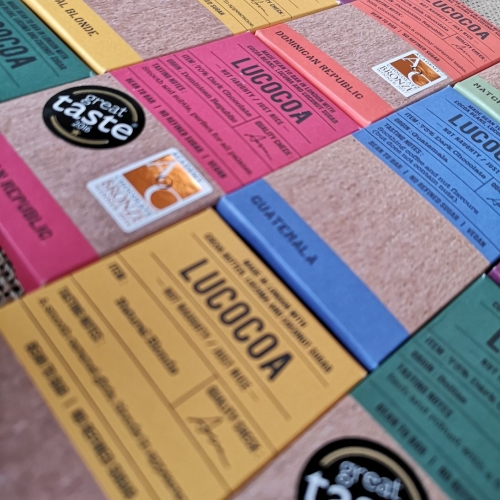 Chocolarder’s small-batch bean-to-bar chocolate contains ingredients such as Cornish honeycomb and wild gorse flower, while the beans are sailed directly to Falmouth. chocolarder.com

Look out for this London-based chocolate maker’s innovative collaborations: its vegan white chocolate with beetroot, rose and vanilla – a collaboration with Raw Press – tastes just like Turkish Delight! lucocoachocolate.com