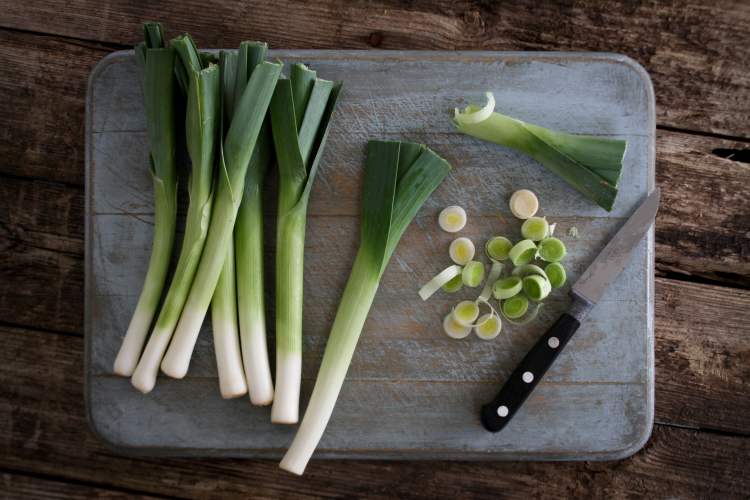 Embrace the first green shoots of British spring with the most versatile of the onion family – the humble leek!

Melt a knob of butter in a pan, add 500g leeks and stir. Cook for 10 minutes, then add 3 medium, chopped potatoes and season well. Pour in 150ml vegetable stock and simmer until the potatoes are soft. Blitz in a blender until smooth, then pour in 150ml single cream and season if needed. Serve warm.

Place 4 chicken thigh fillets and 2 sliced leeks into a pan, pour over 300ml milk and season. Cover and simmer for 15 minutes, leave to cool and strain off the milk, keeping it to one side. Place the chicken and leeks into a bowl and cut the meat into small pieces. Meanwhile, melt 50g butter in a pan, sprinkle over some flour and cook. Gradually pour in the milk, then add 125ml single cream and a pinch of Dijon mustard and stir. Then, add the chicken, leeks and a bunch of chopped tarragon, mixing well. Pour the mixture into a dish, then roll out puff pastry to cover the top. Glaze with beaten egg and make a vent in the top of the pastry. Bake at 190°C/Fan 170°C/ Gas 5 for 30 minutes until golden.

Cook the macaroni according to packet instructions. Meanwhile, melt 20g butter in a large pan, add 3 chopped leeks and a sprig of fresh thyme. Cover and cook for 10 minutes, stirring occasionally. Preheat the grill to high, then add 50g plain flour to the leeks, stir, increase the heat and cook for two minutes. Add 600ml milk, stirring until smooth, season and stir in 200g cheese. Then, add the cooked macaroni, and pour into an ovenproof dish. Top with breadcrumbs if desired, and grill until golden and bubbling. Serve with fresh thyme.

Fry 6 rashers of bacon for 5 minutes, then add 2 finely sliced leeks and cook until soft and colouring for 10 minutes. Tip in 250g risotto rice and cook for a further 10 minutes. Pour over 700ml chicken stock, cover and simmer for 20 minutes, stirring constantly. When the rice is tender and the liquid is absorbed, remove from the heat and stir in 3 tablespoons of cheese. Season as preferred and serve immediately.

Preheat the oven to 200°C/Fan 180°C /Gas 6. Put 4 leeks into a large saucepan with 3 tablespoons of water and 30g butter. Cover and cook for 10 minutes, then remove from the pan and mix with 100g cream cheese and season. Brush a sheet of Filo pastry with melted butter, then lay two more sheets on top, brushing butter between each layer. Place a salmon fillet in the centre, season and then spoon over half the leek mix. Fold the ends over the top and scrunch together. Repeat the process. Brush both parcels with melted butter, put them onto a baking sheet and cook for 25 minutes until brown.

Preheat the oven to 180°C/Fan 160°C/Gas 4. Slice 2 leeks, a shallot and chop 6 rashers of bacon into small pieces. Melt a knob of butter in a pan and gently fry the bacon, adding the leeks and shallot and cooking until soft and the bacon is cooked through. Drape shortcrust pastry over a quiche tin, then blind bake the case for 5 minutes until starting to colour. Meanwhile, spoon the bacon and leek mixture into the pastry base. Beat 3 eggs and 300ml milk with seasoning and 50g cheddar cheese. Pour over the bacon and leeks, and then grate over another 25g cheese. Bake in the oven for 30 minutes, and then serve with salad.

Lay 600g haddock in a frying pan and pour over 500ml milk. Cover and bring to the boil, remove from heat and leave for 5 minutes until the haddock is cooked. Lift the haddock from the milk, remove any skin and bones and place on a plate, keeping the milk to one side. Heat rapeseed oil in a large saucepan, fry the bacon until browning, then add 2 celery sticks, 3 leeks, 2 medium potatoes and 2 bay leaves. Pour in 500ml fish stock and the milk, simmer for 10 minutes. Add the haddock, 100g frozen sweetcorn and a pot of single cream. Season with pepper. Heat through and serve.