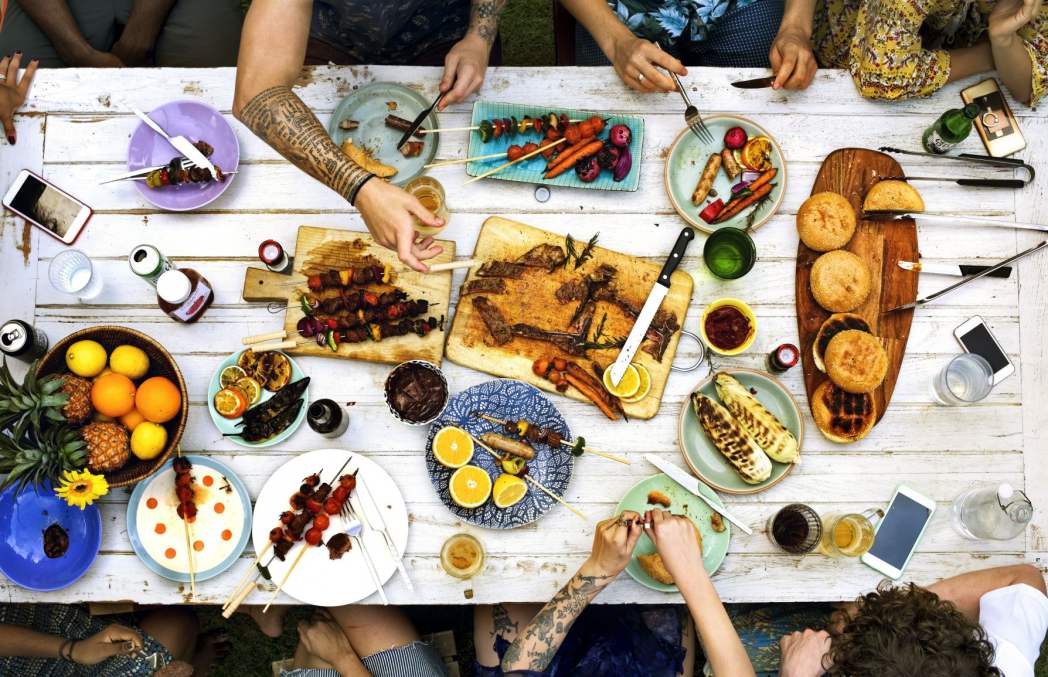 13 hacks for the best ever BBQ

That tell-tale smoky aroma; ice-cold beers cracking open; and dappled sunlight streaming into the garden: you just can’t beat a barbecue. Take yours up a notch with these hot new street food-inspired twists…

Eschew the usual sausages and burgers in favour of a crowd-pleasing cut, cooked long and low. It’s more affordable, there’s less chance of the meat overcooking, and the taste will be incredible, since the meat has more time to take on a complex smoky flavour. Try whole chicken, lamb ribs, pork belly or ox cheek. Smother the joint in your favourite rub or marinade and put on the barbecue over a low heat, then crack open the beers and let it cook away until meltingly tender, checking every hour or so. Serve with zingy salads and crusty bread: guaranteed grilling perfection.

With its underlying smoky flavours, Mexican food lends itself perfectly to a barbecue. Char peppers and tomatoes then muddle with lime and chilli for salsa; grill corn until blistered; and cook sticky chipotle-marinated chicken wings on the barbecue until gnarly and crisp. Serve with guacamole, soured cream, flash-grilled tacos, and a round of frozen margaritas.

Think outside the grill

A barbecue isn’t just for grilling. Cook beef or pork shoulder along with a couple of whole onions. Rest the meat, then dice along with the onions, before using to form the base of a tomato sauce, cooked in a pot placed directly onto the barbecue so it imparts a wonderful aroma into the sauce. Serve with tagliatelle and fresh basil, for a game-changing take on bolognese.

Instead of the usual beef burgers, try blending minced lamb with a spoonful of ras el hanout spice mix. Serve in fluffy flatbreads with a mint-flecked yoghurt, crumbled feta and lightly pickled cucumber. Or, try an Indian-inspired patty, flavoured with cumin, turmeric, coriander and chilli, served with mango chutney and naan breads.

To take the flavour up a notch, try making salsas and salads on the barbecue. Char lemon halves and spring onions, then bash with a little vinegar and rapeseed oil (perfect with fish); grill halved, fat beef tomatoes and halloumi to pile on top of fluffy cous cous; or cook whole garlic cloves in tin foil in a cool part of the barbecue then use to make a heady smoked garlic aioli.

Life life on the veg

Vegetarian options are traditionally an afterthought, but with fresh produce in abundance during the summer months, there’s no excuse needed to make vegetables the star of the show. A traffic-light trio of yellow and green courgettes and red peppers, marked with char lines from the grill, would work wonderfully with a dollop of creamy burrata and a slick of oil. Cheeses such as halloumi and paneer work well (marinade in harissa first), and fluffy flatbreads are elevated with a quick flash on the grill. If you’re making veggie burgers, cooking elements on the barbecue first (corn, garlic, onions and peppers) then blending with creamy butter beans and lentils will give the patties a deeper flavour. Top with salsa verde, chipotle-spiked mayo or crunchy slaw.

Many of us are reluctant to cook delicate fish on the barbecue, but when done well, it’s a real treat. Try wrapping a whole fish, such as trout, in greaseproof paper then newspaper tied up with string (you could add lemon slices and herbs into the parcel for extra flavour). Dip the parcels in water and leave to soak for five minutes, then cook on a medium heat on the barbecue for around 30 minutes. The newspaper will be blackened, but once you peel it away, the fish inside will be perfectly flaky. Simplicity at its best.

Embrace the tricks of the trade

The right tools will make grilling a breeze. Invest in a decent pair of metal tongs, two chopping boards for raw and cooked meat, and a temperature probe to check the meat is cooked to perfection. A cast-iron griddle pan is handy for fish or seafood, while a ‘wand’ made from woody herbs dipped in oil can be brushed over the meat for extra flavour. And don’t forget a bucket full of ice for beer!

If you’re having friends over for a weekend grill-up, there are plenty of drinks to cool you down as the weather heats up that don’t come in a can or bottle. Frozen cocktails are crowd-pleasing and easy to do in big batches: blitz pisco, lime juice, sugar syrup and egg white with ice for refreshing pisco sours, or a pale English rosé with soda and ice for an ice-cold ‘frosé’ everyone will love. When it comes to pairing, smoky drinks such as Mezcal work a treat with charred steaks and burgers.

A punchy marinade will take your grill up a gear. Think about the basic principle of balancing sweet, sour and salty flavours, then let your imagination run wild. Try a Japanese-inspired glazes with soy, mirin, lime, sugar and chilli; a Middle-Eastern-style rub with harissa, preserved lemons and za’atar; or a Korean sauce for smothering over chicken wings made from gochujang paste, soy, ginger, garlic, honey and rice vinegar.

‘Dirty’ grilling, where the food is buried and cooked directly within the smouldering coals, will take your barbecue to the next level. Just be sure you have a solid, tightly packed slab of coals before you cook, so they don’t burn away, and blow over the coals to dust off the ash before you start. Try placing lobster in its shell directly in the coals then brushing with garlic butter to serve, or cook a whole aubergine with the skin on before mashing into a smoky baba ganoush.

Many high street shops now sell home smokers which can be heated on the barbecue. They can be used to smoke anything from chicken to fish, beef and even cheese (smoked Mozzarella is a winner).

The stone fruits around in late summer are beautiful on the barbie: char peaches, nectarines and plums, then serve with mascarpone and crumbled amaretti biscuits. A whole pineapple, cooked with rum and brown sugar, is delicious served with vanilla ice cream, while roasting strawberries over mellow, glowing ambers releases their bright pink juices (serve with good clotted cream and a glass of fizz).