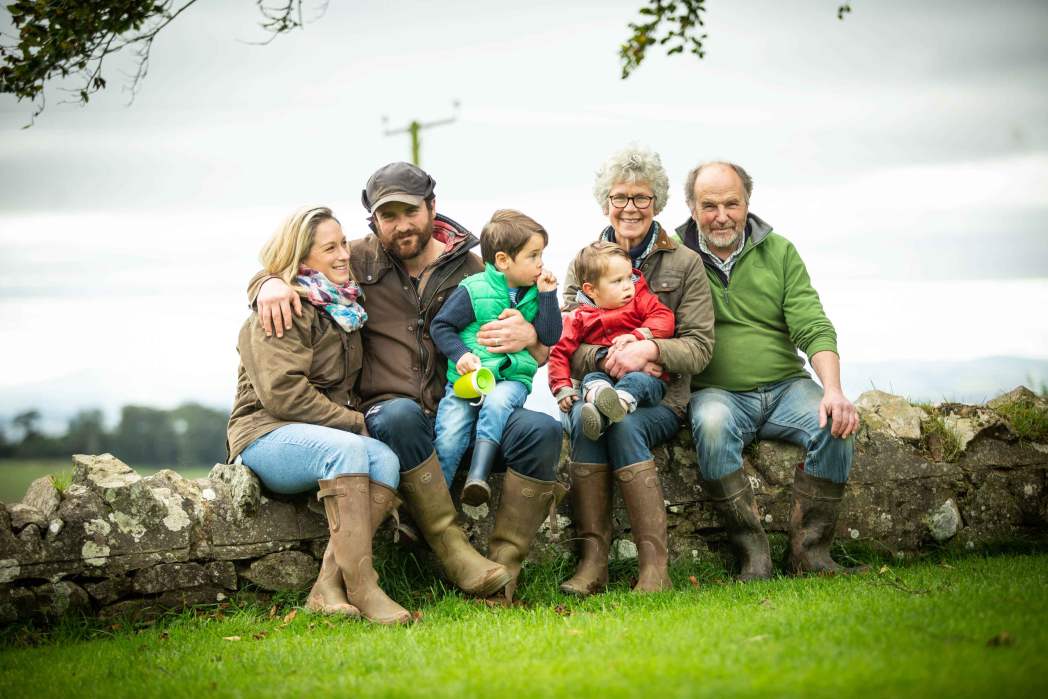 10 of the best ethical meat producers 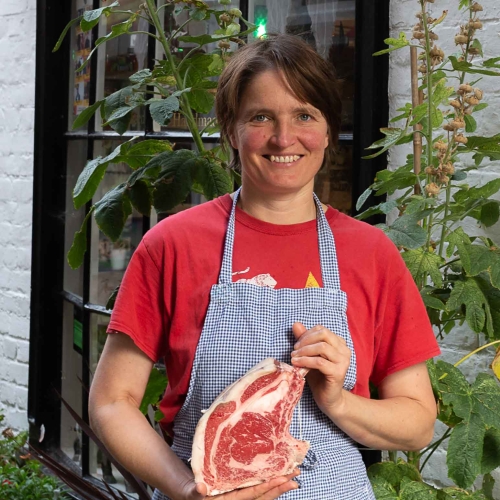 The cyclical rhythms of this small, whole animal butcher is a million miles away from your supermarket counter. Owner Lizzy Douglas buys in a whole body of beef (at least £1,200), two pigs and three lambs a week, creating not just prime fillets but all manner of unusual and cheaper cuts that sell out completely before the cycle starts again. “‘Local’ is a word that’s been dragged through the mud a bit, but all the money stays in the local economy, whether going to my shop or very local farms. Our small, well-run local abattoirs need promoting,” she says. “Without mine, which is about 10 miles from the shop and receives livestock from all the local small farms, I wouldn’t be able to buy local meat. And there’s only about 60 left in the UK.” theblackpigbutchers.com

Chefs and butchers will tell you ex-dairy cows make the most delicious beef, and this dairy farm has been selling its ‘Lady Brown Cow’ joints, fillet, rib and shin for nearly four years. “Our dairy cows go to slaughter when they have reached the end of their productive lives, which for us averages around ten years old,” says Naomi, who rejoined her parents on the family farm after a busy few years with the NHS. “We have been analysing the soil for over 20 years on our farm, and are involved in various research projects with the Soil Association to look at ways in improving the soil structure and the ability of the grasses to sequester carbon and therefore combat climate change.” browncoworganics.co.uk 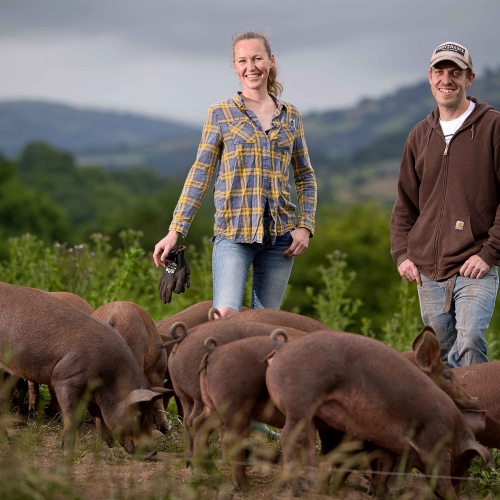 A life running free in woodland and pasture makes for some superior pork at this Welsh farm. “The pigs have a great life and the added bonus is that the meat is really good,” says farmer Kyle Holford, who runs the business with his partner Lauren Smith. “A ‘Welsh Black’ is what chefs call a cross between a Large Black (which is a really rare breed with inherent flavour and hardiness but lots of back fat) and a Duroc (which is bred for flavour and marbling). It makes for a fabulous meat that’s not cost-prohibitive, because sustainability for the farmer – making this lovely way of farming produce a meat that people can actually afford whilst making some profit for the farmer – is essential. It’s always a tightrope walk.” forestcoalpitfarm.co.uk

Biodynamic farming could be described as organic-plus, and at this 150-acre site with Aberdeen Angus and point-of-lay chickens, farmer David Hampton has many years’ experience of working with nature’s subtle signs. “We use homeopathic remedies on the ground and the crops, which we grow to have as our own biodynamic feed, and treat the animals with flower essences,” says David. This more holistic approach is about prevention not cure, minimising illness and anxiety among the livestock. “You get a feeling for how plants and animals are reacting – and what might be stressing them – and work together.” hamptwix@myfwi.co.uk 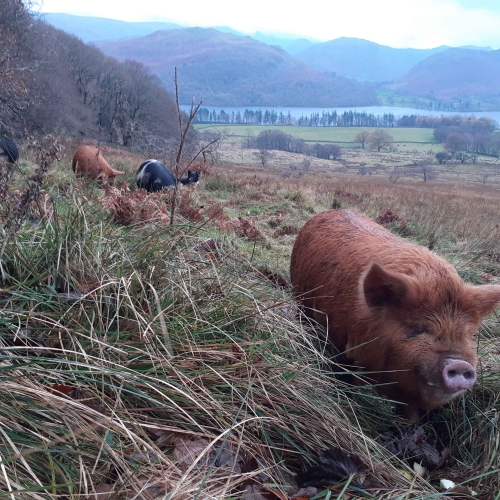 “Our farm contains a diverse mixture of heather moorland fell, ancient wood pasture and species rich meadows, which we’re regenerating through careful management of our Shorthorn cattle, Kune Kune pigs and fell ponies,” says Sam Beaumont, who farms with wife Claire. “Our Pasture for Life beef and pork are very special; we don’t use grain supplementation, and the animals thrive outside all year, accessing all of our habitats. The cattle are rotationally grazed on our pastures throughout the summer months, before being moved into the wood pasture for winter. The pigs spend all year foraging in our wood pasture and woodland, feasting on acorns in the autumn and winter. The depth of flavour and nutrient density of our produce is second to none.” gowbarrow.co.uk 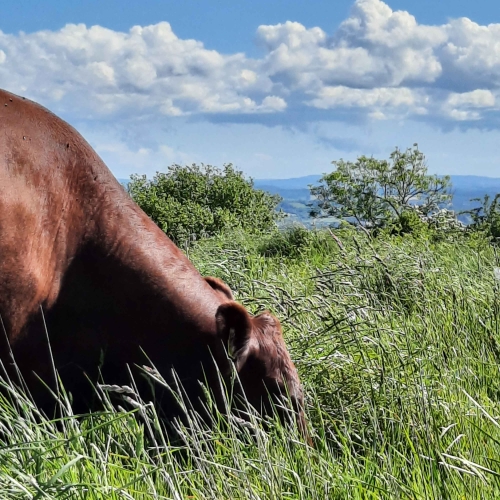 It was winter 2018 when farmers Neil Tustian and Lottie Sweeney took on 186 acres high up around Ebbor Gorge in the Mendip Hills. “It had been farmed very hard for about 50 years,” says Neil. “The first thing has been to rest the land, so starting from scratch we bought in just eight in-calf heifers and two Jersey calves.” Three years of tree-planting, pond-restoration and soil inoculation, leaving grass and hedges to grow long and wild, have transformed the farm’s biodiversity and resilience. Today it buzzes with butterflies, birds, snakes, bats…and Neil and Lottie feel so much more is possible. The farm is home to 38 Ruby Red Devon cattle. Neil and Lottie’s low-carbon, high welfare, 100% grass-fed beef finally went on sale this summer. ebborgorge.co.uk 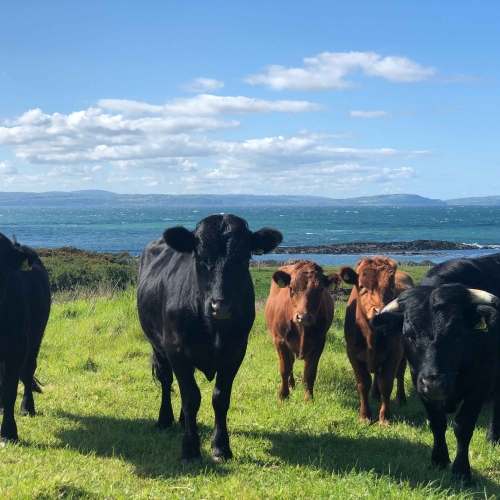 “At the core we are regenerative farmers with a focus on the soil fertility, biodiversity, water retention and cleanliness,” says farmer Hannah Alexander, “as well as carbon sequestration. This spring we sowed 55 acres with 16 different species of grasses, herbs and legumes that are tolerant to climate change including drought and periods of heavy rain. They especially help with soil fertility and structure and variety of plants, which builds up soil health and biodiversity giving our herd of 100 Dexters that edge over conventionally-reared cattle. They are reared on a 100% pasture-based diet and slowly mature to 30-36 months before being ready. We know our meat has fantastic flavour; some people say it tastes how beef used to taste!” ballyboleydexters.com 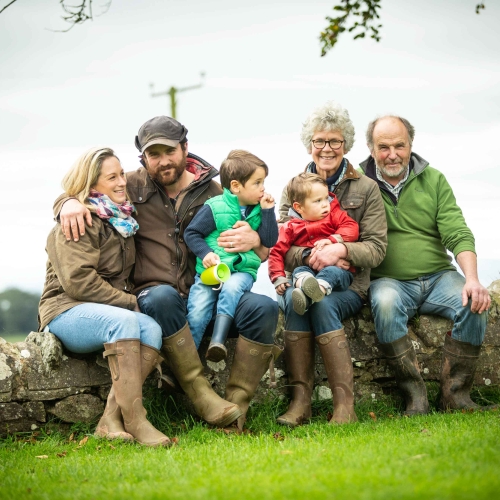 Over 25 years this family business has grown from 20 acres to a 650-acre organic and free-range farm with Lleyn mutton ewes, cattle and pigs – and an on-site butchery. “When you buy from us you’re buying into a regenerative agriculture trend, and every mouthful has a regenerative impact,” says co-founder Denise Walton, who formed the business in 1990 with her husband, Chris, and neighbour Amanda Cayley. “A great-quality product for the customer comes first, but our agro-ecological principals are part and parcel of everything we do. Farming has so often treated nature as a slave, and right from the start we have absolutely had to punch above our weight to show regenerative methods can produce the food we need.” peelham.co.uk

“Our livestock (150 sheep, 70 Aberdeen Angus cows, two sows and their offspring, and 340 pastured laying hens) are in rotation around the farm,” says Nic Renison, who farms with husband Sam. “The cattle and sheep lead with the chickens a few days behind them, and the pigs ‘pulse’ through the woods and rough areas. This ‘circular’ way of farming means lower vet bills, a huge rise in biodiversity, better growth in the animals and the pasture, lower inputs (no fertiliser or sprays) alongside having a positive effect for the climate. Importantly this system produces beef, pork, lamb and eggs which the consumer wants to buy: we open days where anyone can see exactly how we farm.” facebook.com/cannerheugh 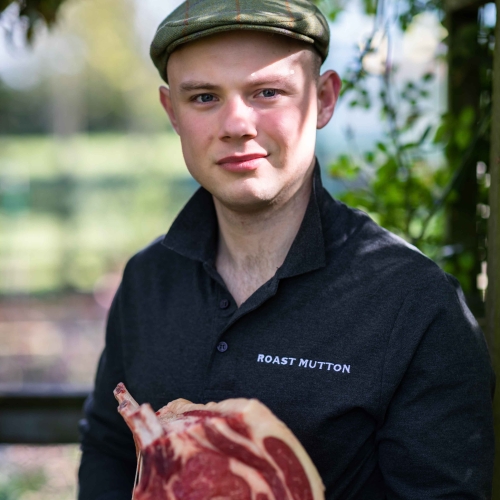 It was the experience of humane animal husbandry on the family small holding in Lancashire that encouraged former insurance broker Rob Unwin to retrain as a nose-to-tail butcher. After spending three years working with five different butchers he set up his Kendal business last summer, selling local Herdwick lamb and Saddleback or Berkshire Black pork reared around Ullswater. Rob takes orders for a half, quarter or eight of each animal, using unusual cuts to meet his ‘zero wasted protein’ ethos and dispatching the Pasture For Life-accredited cuts wrapped in insulating woolpacks. roastmutton.co.uk