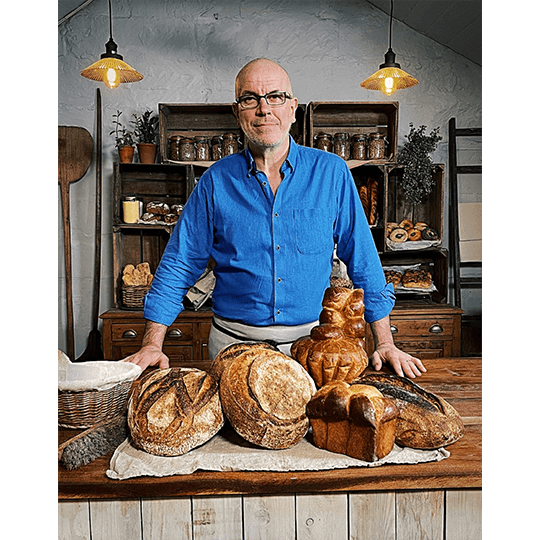 Richard Bertinet fell in love with baking as a 14 year-old apprentice in his native Brittany and has been cooking, baking and teaching in England for over 30 years. In the 1980s he was Head Chef at both the Rhinefield House Hotel in the New Forest and the Silver Plough at Pitton, near Salisbury. In 1996 he became Operations Director of the Novelli Group of Restaurants in London, following which he set up Dough Co, developing specialty breads and consulting for both small and large bakeries.

The Bertinet Kitchen cookery school opened in 2005 and spearheaded the explosion of interest in artisan and home baking in Britain. Richard’s classes, built around the techniques he has honed over the decades, are designed to explode the myth that baking bread is too daunting and complicated to fit into busy lifestyles, and to give beginners confidence as they discover the wonders of working with dough; while seasoned bakers and professionals find themselves fired up with a new enthusiasm for baking.

‘All it takes to make bread is flour water and salt. To make great bread, add a little Bertinet.’ Pierre Koffmann

‘Richard never ceases to amaze me with his effortless skills as a baker…a bread genius.’ Angela Hartnett

‘The nearest thing bakery will ever have to a Jedi.’ Tim Hayward, The Guardian

Have your product
judged by
Richard Bertinet