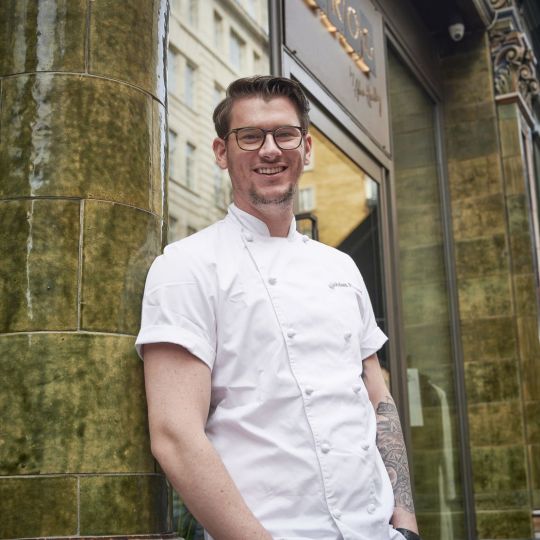 p>p>Adam Handling’s culinary journey started at Gleneagles where he was the first ever trainee chef, before he went on to become Fairmont’s youngest ever head chef, culminating in winning Scottish young chef of the year 2011. At the 2013 Acorn Awards, he was the youngest person to be tipped by the caterer magazine as one of the ‘30 under 30 to watch’. Adam has since been awarded Scottish Chef of the Year 2015, Newcomer Restaurant of the Year in the Food and Travel Reader Awards 2015, as well as the British Culinary Federation’s Chef of the Year 2014.

Adam opened his first independent restaurant in June 2016 in Shoreditch, London, which won ‘Best Restaurant of the Year’ in the 2017 Food & Travel Reader Awards, alongside 3 AA rosettes and a Michelin Bib Gourmand. In 2018, Adam opened a new, larger site at 45-47 Hoxton Square. The building, which sits on the corner joining Hoxton Square, Rufus Street, and Old Street, is home to The Frog Hoxton – which also won a Michelin Bib Gourmand – as well as Bean & Wheat (a sustainable café and bar), and a dedicated events venue, Iron Stag Hoxton.

Frog by Adam Handling in Covent Garden opened in September 2017 and is Adam Handling’s flagship restaurant site. The restaurant has been heralded as a “smash hit” by the London Evening Standard and one of the “best restaurants in London” by Condé Nast Traveller. Frog by Adam Handling has won prestigious awards since its opening, including ‘Best Newcomer Restaurant’ in the 2018 Food & Travel Reader Awards and ‘Best Overall Wine List’ at the 2019 Wine List Confidential awards.

Eve was Adam’s first stand-alone bar and is located underneath Frog by Adam Handling in Covent Garden. Eve serves unexpected takes on cocktail favourites with exciting and unique flavours created in Eve’s state-of-the-art drinks lab, which is used to distil, carbonate and clarify the bar’s signature creations.

In February 2019, Adam Handling opened Adam Handling Chelsea at the Belmond Cadogan Hotel. The main restaurant, featuring an open kitchen, is located in what was once royal courtesan Lillie Langtry’s drawing room, and has an adjoining Bar and Terrace. Adam is also overseeing the entire food and beverage offering at the hotel, including breakfast, in-room dining, banqueting and events.

Cadogan’s by Adam Handling, the stunning tea lounge at the Belmond Cadogan Hotel, also offers a spectacular Afternoon Tea. Inspired by childhood memories of plentiful, delicious feeding at his grandmother’s house, Adam and his team have created a unique Afternoon Tea concept that perfectly blends history and nostalgia with show-stopping culinary technique and flair. The outstanding tea features intricate and memorable offerings freshly prepared each day, served with a selection of the finest luxury teas and Champagne.

In 2021, Adam launched his first venue outside of London, The Loch and Tyne in Windsor

A highly accomplished chef, Adam Handling’s beautifully presented modern British dishes start with careful sourcing of top quality, seasonal ingredients, prepared in a number of different, creative ways to enhance their inherent properties and deliver real depth of flavour and harmony. Across all of his restaurants, Adam is committed to sustainable cooking and eliminating waste at every stage by utilising any by-products (i.e. vegetable peelings and skins) and offcuts. 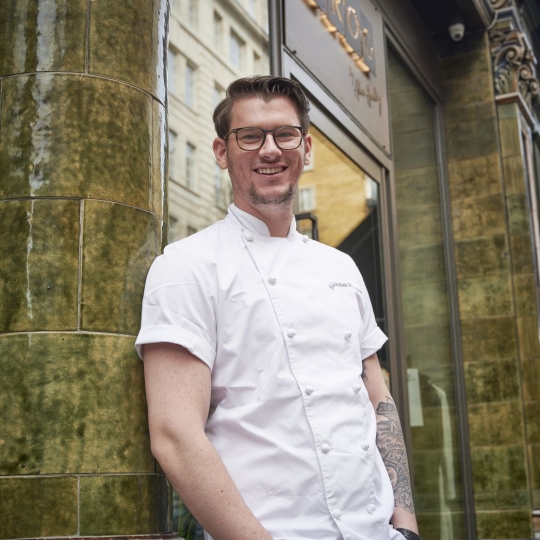 Have your product
judged by
Adam Handling