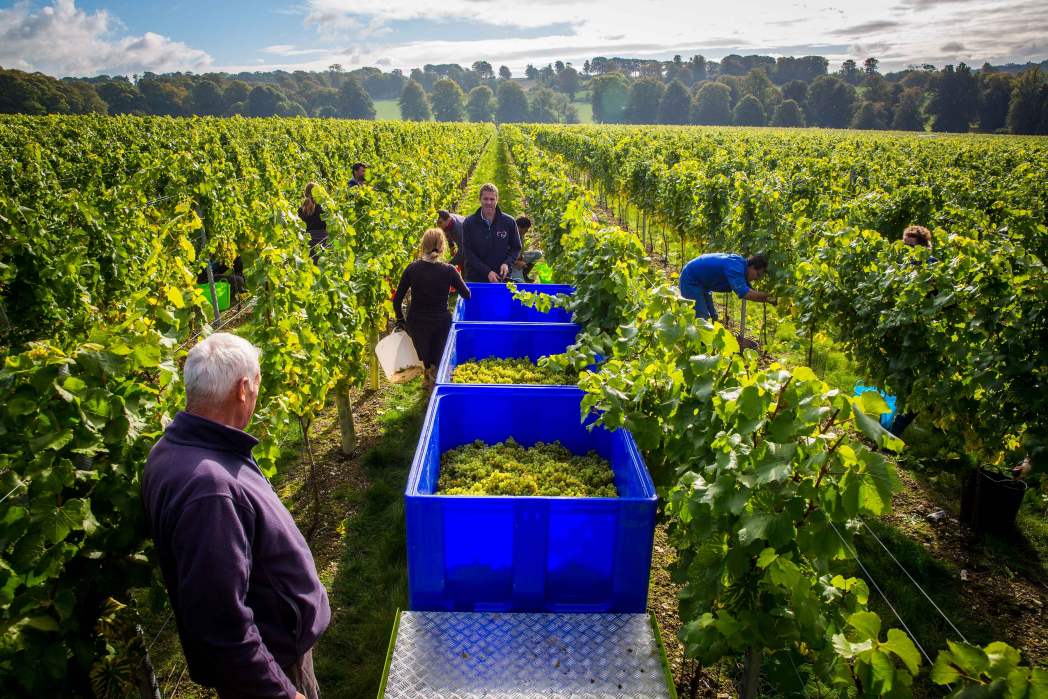 From green shoots: planting season on a Kentish vineyard

A winequake is unfurling in the chalky slopes of Southern England, and beyond; Anna Blewett experiences planting season in the Wine Garden of England

Chalky soil, woody roots and red sealing wax. These humble ingredients may sound unlikely heroes for the decade ahead, but some serious money is being bet on their potential to transform England and Wales’ wine scene. The last few years have seen a flurry of spring plantings as our native vineyards plough their pennies into the future of English wine. This year British vineyards are digging like never before, gambling on the weather, the evolving climate, their own skill at winemaking and our desire to pay proper money for world-beating still and sparkling wines. It takes several years for vines to produce viable fruit, and more precious months and years to transform the fresh juice into something gorgeous that will sing of Kent’s mineral soils and sunshine for generations to come. But the green shoots of a golden age are emerging. 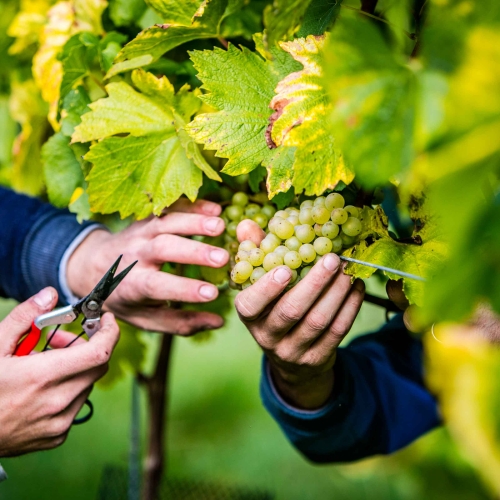 So it’s on a bright, breezy day that I clamber down from a wine estate Landrover and over my boots into swirling chalk dust. The rolling hills of Kent’s Elham valley stretch away, with lush hedgerows dividing bright yellow rapeseed and green cereal shoots…but not here. This bare 22-acre field, known locally as Bonny Bush Hill, is arguably more special than its neighbours. It faces south, pulling in a few more sunlight hours, and steeply slopes, draining cold air away from its furrows. It’s bordered top and bottom by busy roads that further disturb the air, unsettling atmospheric frosts and garnering a precious few degrees extra warmth. And, crucially, it sits just six miles from the white cliffs of Dover on a ridge of chalk that extends under the English Channel through the Champagne region of France and into Burgundy.

My hosts today are Ruth and Charles Simpson, seasoned wine people who in 2012 began looking for land in Britain to complement operations at their Languedoc vineyard, Domaine Sainte Rose. Bonny Bush is their third vineyard around the Kent village of Barham, each producing a single variety wine that bears their name. One day Bonny Bush Chardonnay will join the ranks. “Provenance and authenticity is our big thing,” Charles shouts over the engine as we bump up the track that borders Bonny Bush. “We don’t want to buy in grapes from other parts of the UK. We believe wine should have a sense of place; it needs to come from somewhere. For us that’s only from this valley.” The whole region is beautiful, but Ruth and Charles were quick to spot the very particular potential here. “People say England’s suitable for viticulture. Well that’s nonsense. Just small bits of it are.” 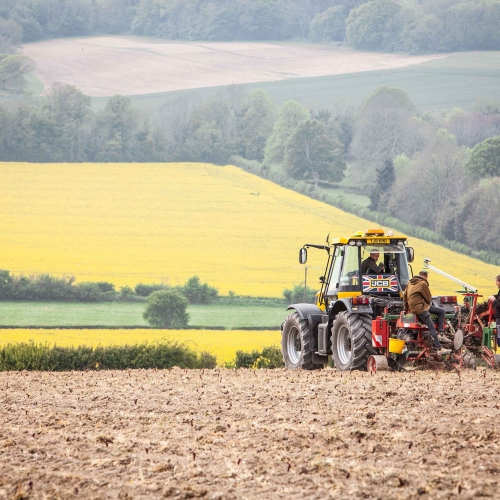 On this newest part of Simpsons Wine Estate a tractor trawls up and down pulling a satellite-guided rig. Aboard, two dusty labourers feed 35,000 Chardonnay vines into spinning gear that buries each in a pre-determined spot accurate to 2mm. This team of contractors are well-practised. Spanning Kent, Sussex and East Anglia, a three-week planting period sees them start an incredible 300,000 vines. Their services are in high demand; post-Brexit restrictions make it harder for seasoned French planting teams to cross the Channel, and the Simpsons are far from alone in investing into English soil this summer. In May Chapel Down, which proclaims itself the world’s leading English winemaker, completed planting on a new 38-acre vineyard as part of a plan to take its total growing area to 778 acres. Meanwhile Champagne house Louis Pommery, which has 82 acres under vine at Pinglestone Estate in Hampshire, plans to plant 25 more at a second site nearby and has plans for its own Hampshire winery. Tattinger, the Simpsons’ near neighbour and the first Champagne house to plant in England, is expected to release its first bottles of its Kent fizz, Domaine St-Evremond, in 2024.

“They’re a fantastic boost for English wine,” says Ruth, crediting Tattinger with bringing winemakers’ gaze east from Sussex to Kent. The endorsement and interest of Champagne players is no small shakes. “When we told our French friends we were buying in England they thought we were beyond bonkers,” says Charles. “They wouldn’t even talk to us about it; they went silent. Until a French company did the same that is.” Because here’s the thing: while the rolling hills of Champagne are crammed with about as many vines as they can squeeze in (and periodically suffer higher temperatures than is ideal) the chalk downs of Southern England remain very much under developed. 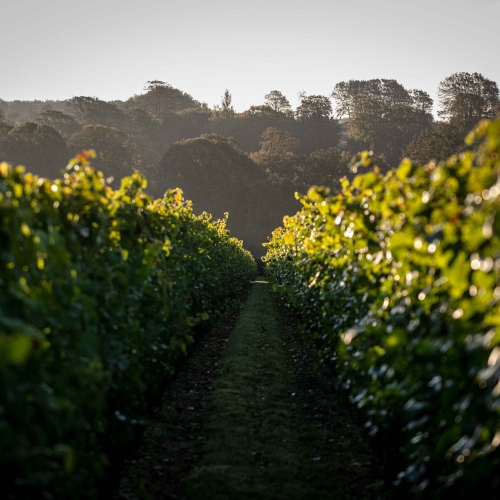 At least for now…“There are definitely a lot more vineyards popping up, and plenty that not everyone has heard of,” says Gavin Hills, wine buyer for Tom Kerridge’s restaurant group, where English wines have been championed for more than ten years. “There’s been such a development from years ago when it was a real fight for us to get people to try English wine. People would say ‘I don’t trust that; I want Prosecco or Champagne.’ Now they’re more confident to try. Quality does vary, small vineyards don’t have the man power, but the bigger vineyards really have paved the way for smaller players. A lot of the producers we work with have a lot of money behind them and have that time and age as well. It’s incredibly exciting.” And while some worry that English fizz, with its higher production costs and unpredictable summers, makes a risky investment, wine people are feeling good. “I think the sky’s the limit,” says James Bayliss-Smith, whose low-intervention wine-canning start-up is symbolic of the optimism and innovation in the industry. “Naysayers were saying two years ago that we’d planted too much and that we were doomed but sales have continued to grow. The staycations during Covid were a real boon to the industry and helped fuel the growing recognition of English wine.”

But while most vineyards are banking on a growing thirst for English sparkling wines made to ‘Great British Classic Method’ as Champagne methodologies are now called here, the Simpsons’ latest plantings back a different horse. “When we came back to England is was all about finding chalk soils in which to plant vines for sparkling,” says Ruth. “Our plan was only to make sparkling wine, but when we discovered how warm we were and the potential for still wines here we really saw the opportunity to grow our business.” Bonny Bush’s particular Chardonnay vines hail from Burgundy stock; in harvests to come they’ll produce smaller yields than those intended for sparkling, but higher flavour concentrations will make for a really excellent Chablis-style white. 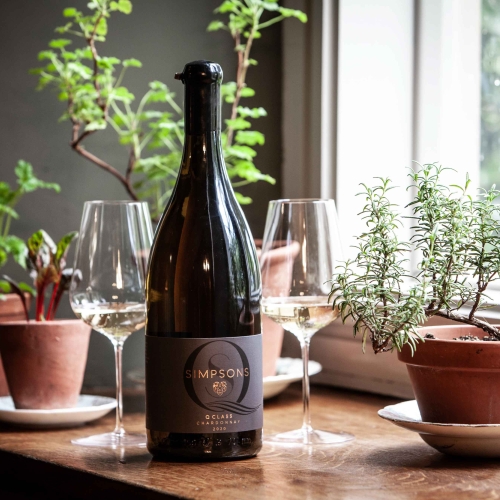 Later, gently swilling a glass of the Simpsons Roman Road Chardonnay from their Roman Road vineyard (a winner at the 2020 Decanter World Wine Awards) I discover what the fraught real estate hunt, the vine import kerfuffle and precision planting is for. The frost anxieties, the endless de-leafing, spraying and tending of the vines, the sun/rain dances and the scrupulous care at picking and every stage of wine making…the tribulations of years pour out as a glowing glass of vitality: the celebration of a very special landscape. I raise a glass to Bonny Bush Chardonnay. It’s going to take its sweet time coming, but I can wait.

For more information and to buy wine online visit simpsonswine.com